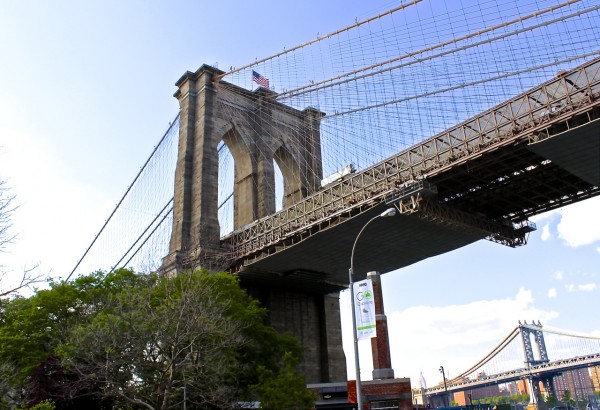 The Brooklyn Bridge—the world’s first steel suspension bridge—is a beloved landmark and a cultural icon of NYC. It’s been celebrated in art, poetry, song, and on film. The mastermind behind the bridge called it “the greatest engineering work of the age… a great work of art.” And we have to agree!

Here’s what to know about the Brooklyn Bridge!

Quick facts about the Brooklyn Bridge

The roadway platform is hung on steel suspenders strung from four thick cables, each made of 5,296 galvanized steel wires bound together and anchored on both shorelines.

How the Brooklyn Bridge was built 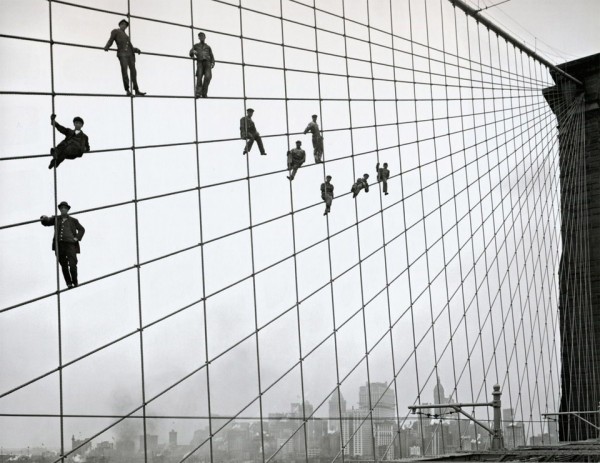 Building the Brooklyn Bridge. Not an easy job!

In 1867, one-third of the workers in Brooklyn (then the nation’s fourth-largest city) worked in Manhattan. The only way to reach the island was by boat, and the river sometimes froze solid, stranding commuters and isolating both cities.

And so, that year, a plan for a massive bridge was approved. It was designed by John A. Roebling, an engineer who’d made a fortune pioneering the manufacture of wire rope made of a new type of metal: steel.

Building the bridge was an enormous undertaking, as it had to span the half-mile river (the busiest waterway in the world at the time) and be tall enough to allow clipper and steam ships to pass beneath. 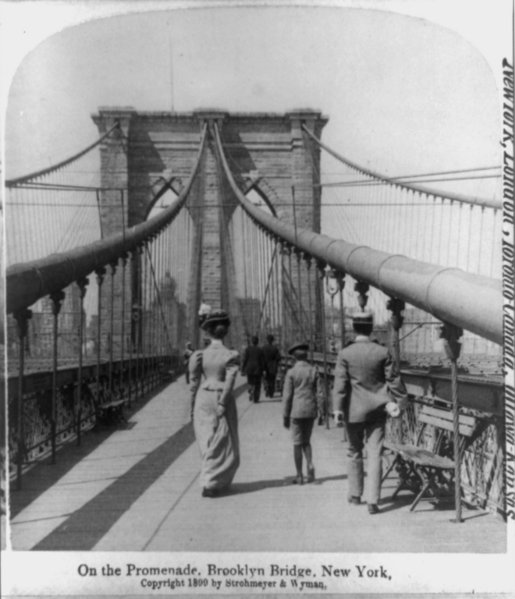 Walking the Brooklyn Bridge… back in the day

Construction took 14 years and claimed 27 lives, the first being Roebling himself. While surveying, his foot was crushed by a ferry (which, ironically, his bridge would put out of business), and he died of tetanus. His son Washington Roebling took charge of the mammoth project.

While there were great dangers working from the heights of the towers and cabling, it was the river beneath that was most hazardous. Men toiling in submerged caissons to create the tower foundations (44.5 feet deep in Brooklyn and 78.5 feet deep in Manhattan) often suffered from decompression sickness (aka “the bends”). Roebling himself became paralyzed by the “disease.”

The Brooklyn Bridge finally opened on May 24, 1883, and instantly became a triumphant symbol of the city. Walking the Brooklyn bridge between Manhattan and Brooklyn became a favorite stroll for those living in both cities and it was designated a National Historic Landmark in 1964.

The following information describes crossing the bridge from Manhattan to Brooklyn. 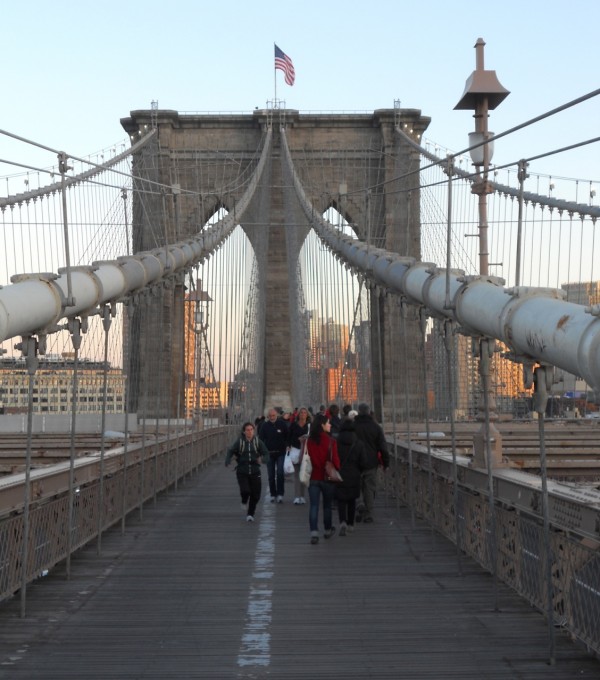 The Manhattan entrance to the bridge’s pedestrian promenade is found on the east side of City Hall. The closest subway is the Brooklyn Bridge/City Hall station (4, 5, 6, J or Z trains). Another option is the 2 or 3 to Park Place, and walking east through City Hall Park.

It’s 1.3 miles across the river so walking the Brooklyn Bridge will take half 20 minutes or more, depending on how fast you walk and how many times you stop for selfies.  Those with difficulty walking distances, or with small children, should take this into account.

After the concrete ramp, you’ll reach the original wooden slats of the pedestrian promenade. You can peer down through them to the roadway below (not for those made uneasy by heights!). High heel shoes are not a good choice.

Note the white line running down the center of the promenade. One side is designated for pedestrians (facing Brooklyn, on the right) and the other for cyclists. Straying into the bike lane will usually lead to a snarky encounter with a cyclist, but can also be quite dangerous (some bike defiantly fast!). If you cross for a photo, always look both ways.

Note the date at the top of the Manhattan tower: 1875.

Look for the series of plaques at both towers, detailing “How the Bridge was Built.”

Midway between the towers are incredible views.  To the south are Governor’s Island, the Statue of Liberty, and New York Harbor. To the north is the Manhattan Bridge (you may see the subway running underneath), and the midtown Manhattan skyline, including the Empire State Building and the Chrysler Building.

(if you want to know the best way to see the Empire State Building, check out our blog on it!) 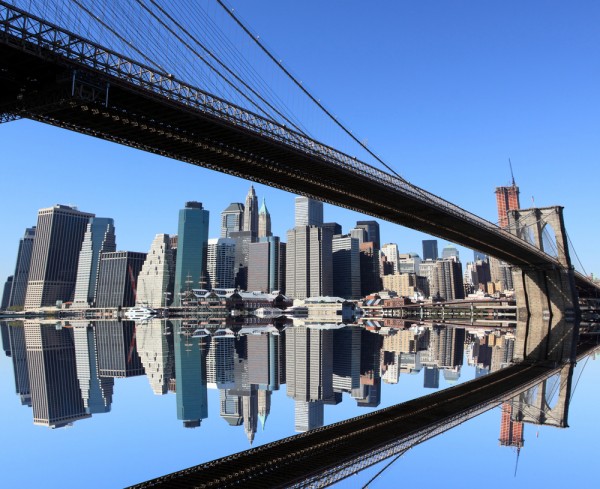 As you progress, grasp one of the metal suspenders, still strong after 130 years. 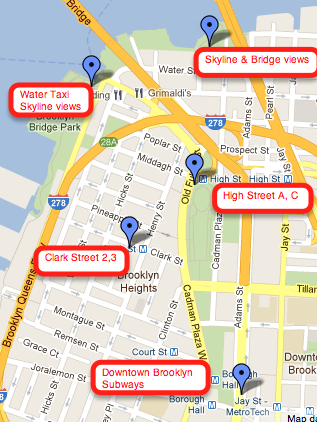 After passing the Brooklyn tower, you’ll see Brooklyn Bridge Park below. There are spectacular views of the bridge and Manhattan skyline from both the Brooklyn Heights (south) and DUMBO (north) sections of the park.

As you reach Brooklyn’s concrete ramp, look for the tunnel to the left (note the sign “Welcome to Brooklyn.”) Here are the steps leading down to the street.

At the bottom of the steps you’ll see a sign to the right for “Brooklyn Heights,” and another to the left for “DUMBO” (Down Under the Manhattan Bridge Overpass). There’s a neighborhood map on the wall as well.

The closest subway stops are to the right. Follow the path through the park to the High St. Station (A and C lines), or continue on to Clark Street, and walk two blocks toward the river for the Clark St. Station (2 and 3 lines). In warm weather, a great alternative to the subway is the New York Water Taxi from Fulton Ferry/Brooklyn Bridge Park.

Fascinating facts about the Brooklyn Bridge

The Brooklyn Bridge cost $15.1 million to build (more than double what was originally projected).

As the caissons sank deeper, the sandhogs suffered so intensely from “caisson’s disease” (often fatally) that construction was eventually halted on the Manhattan tower 30 feet (10m) short of bedrock. The Manhattan tower rests on sand.

After his crippling affliction, Washington Roebling’s wife Emily became his aide, learning engineering and communicating his instructions to the on-site assistants.

On the bridge’s opening day, nearly 2,000 vehicles, and more than 150,000 pedestrians, crossed. They turned walking the Brooklyn Bridge into an instant icon of the city.

The bridge was so technically ahead of it time many could not believe it was safe. On May 31 (a week after opening), 20,000 people were strolling on the bridge when a young woman tripped. Someone screamed the bridge was falling, and in the panic 12 people were crushed to death while hundreds were trampled in the stampede.

In 1884, to prove the bridge’s stability, P.T. Barnum paraded 21 elephants across the promenade.

The first person to jump from the bridge was Robert E. Odlum on July 23, 1886. A swimming teacher, Odlum made the jump in a costume bearing his initials. He survived the pre-announced jump, but died shortly thereafter from internal injuries.