It’s fairly obvious we’re big Broadway fans here at Walks of New York. Whenever possible, we’re down in Times Squares soaking up the electric atmosphere and taking in the bright lights. But with so many theaters and shows vying for your attention, it can be tough deciding which one to fit into your short NYC break and how to go about booking tickets. To help you out, we’ve compiled a list of frequently asked questions about going to the theater in New York. Take advantage of our expert Broadway tips and get the best seats in the house! 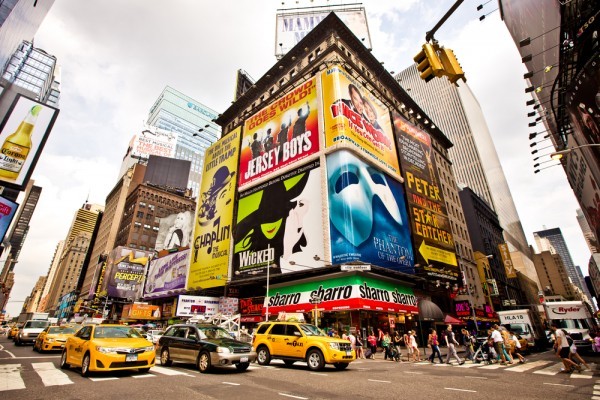 What’s the difference between Broadway and Off Broadway theaters?

When are Broadway theaters open?

This depends on what kind of theater it is and what type of play is being shown. Many theaters with musicals are dark on Monday nights because they have family-friendly Sunday matinees. Those showing straight plays often will have a performance on Monday night as there is no Sunday matinee. Generally speaking, Off-Broadway theaters are dark on Monday and Tuesdays, although there are some exceptions to the rule.

Broadway Tips – How do I find out about the best shows?

New York City Theater, Time Out and the New York Times are great sources of information when it comes to NYC Broadway shows. Tickets for top shows sell out fast so one of our top Broadway tips it to get looking and booking as soon as you know the dates you’re going to be in New York. Read reviews online and get recommendations from friends to suss out the best show for you.

When should I buy tickets?

The simple answer is – as soon as possible! New shows tend to sell out really quickly so stay ahead of the crowd to avoid disappointment. Likewise, if you want the best seats in the house, book early. A few weeks in advance is usually fine for most shows with Saturday nights being the most popular time. If you arrive in New York without tickets, fear not! You can always buy tickets on the day although your choices may be limited.

Where can I purchase cheap tickets?

This is one of our most important Broadway tips, as we are regulalry asked this question. Check out the TKTS booths, run by the Theater Development Fund in Times Square, South Street Seaport and Downtown Brooklyn. These offer same-day discounted tickets for Broadway shows and Off-Broadway shows. You can sometimes save up to a whopping 50% although do be prepared to join a lengthy queue of like-minded Broadway fans. Ask your hotel concierge for advice about getting cheap tickets for shows. They will sometimes be able to get reduced rates for their guests.

We hope our Broadway tips are useful and if you fancy discovering the history of Broadway for yourself? Book your place on our special Disney on Broadway tour today.

Rodgers and Hammerstein
What to see in the Met