A Stroll Through Brooklyn Heights

By Walks of New York on July 24, 2012 in Explore NYC, Neighborhoods 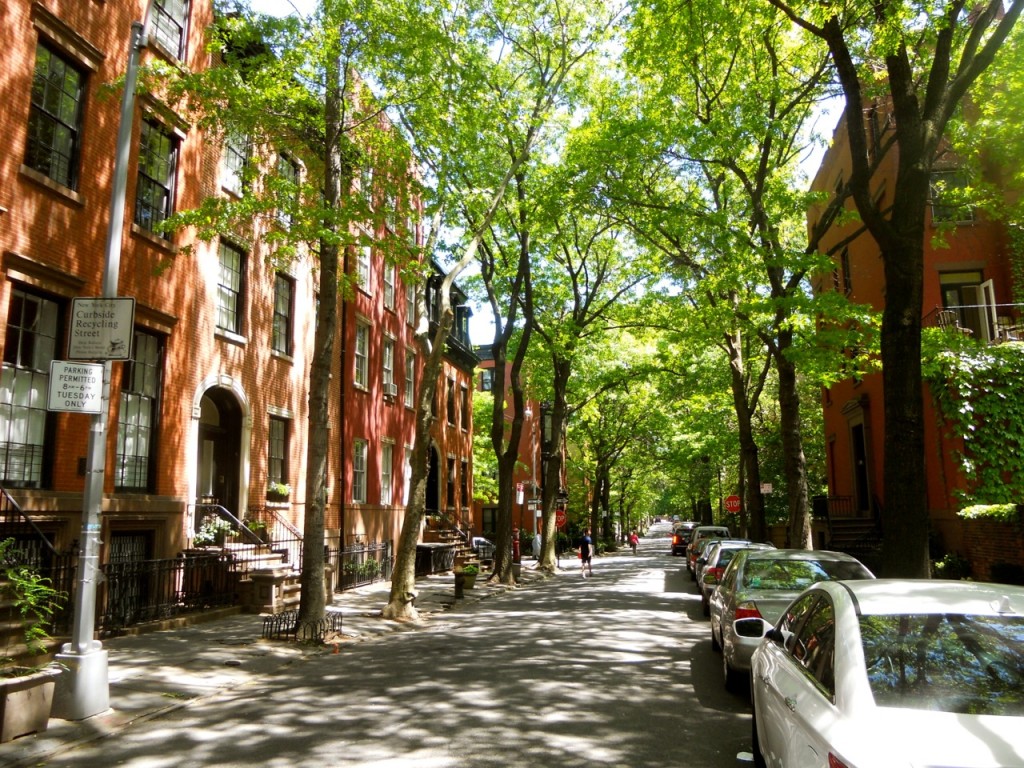 Brooklyn Heights, Brooklyn is, hands-down, one of our favorite neighborhoods in New York (not just in the borough of Brooklyn!). Strolling through Brooklyn Heights is like entering a genteel, bygone era… not to mention boasts great views of the Brooklyn Bridge and a gorgeous park.

Here’s what to know about Brooklyn Heights, what sights not to miss, and how to get there from Manhattan (it’s easy, we promise!).

Getting to Brooklyn Heights

Another great option is to take the New York Water Taxi from Pier 16 at South Street Seaport across the river to Fulton Ferry.

A walking tour of Brooklyn Heights

Once you’re there… it’s time to explore! 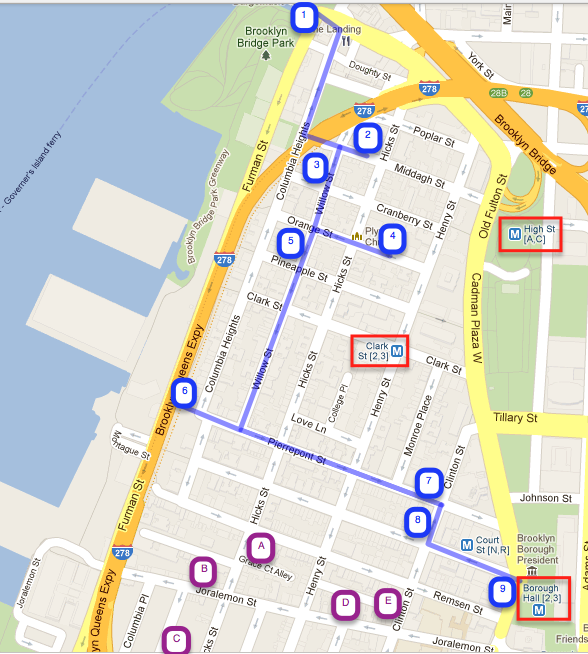 A walking tour of Brooklyn Heights 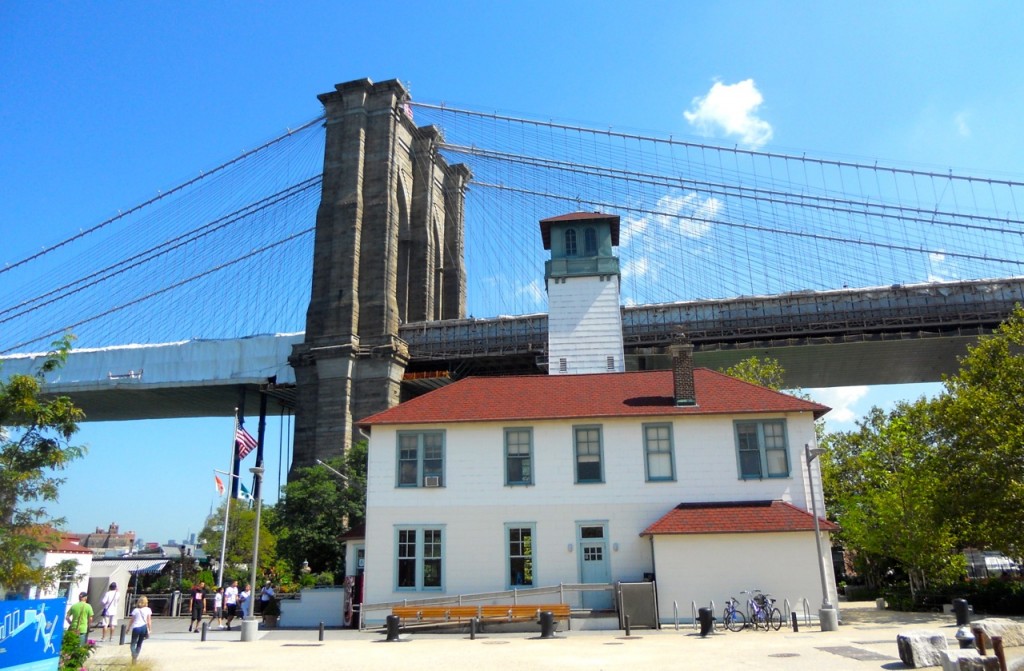 1. Start at a place fundamental to the founding of Brooklyn (and even the nation): Fulton Ferry Landing.

Ferries to Manhattan have operated here since 1642, and this is where Robert Fulton’s steam ferry began connections in 1814, leading to the growth of Brooklyn Heights as a residential enclave.

It was also here, in 1776, that George Washington smuggled his defeated troops across the river under cover of night and fog… saving them, and the nation, from conquest by the British Army.

Today, here at the foot of the mighty Brooklyn Bridge, there are spectacular views of both the bridge and the Manhattan skyline. Lovely Brooklyn Bridge Park stretches to the south (to your left, if you’re facing the river) and includes lawns, cafes, restrooms, and events. 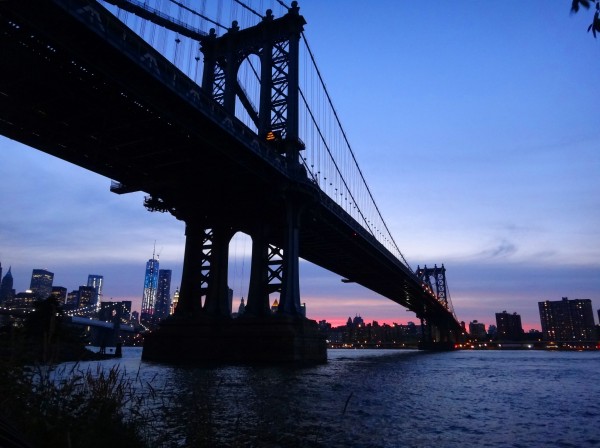 Under the bridge is the famed River Cafe. Continuing north is more waterfront park, plus the trendy neighborhood of DUMBO, where oldwarehouses and factories have been converted into art galleries, performance spaces, apartments, shops, and restaurants.

2. Walk up Old Fulton Street and stop at the first corner (on the south side). The redbrick fortress before you is the Eagle Warehouse and Storage, once the site of The Brooklyn Eagle, the newspaper edited by Walt Whitman from 1846-1848. Whitman lived nearby, and his Leaves of Grass was first printed a few blocks from here.

The white cast-iron building on the corner of Old Fulton and Front Streets (look for the line of people outside) is the famous Grimaldi’s Pizzeria, which some claim is New York’s best.

3. Turn right and proceed on Everit Street (soon changing to Columbia Heights), walking up the hill and under the bridge connecting two large yellow buildings. At the top of this former factory, you’ll see the words, “Watchtower,” indicating it is the Jehovah’s Witnesses’ headquarters. 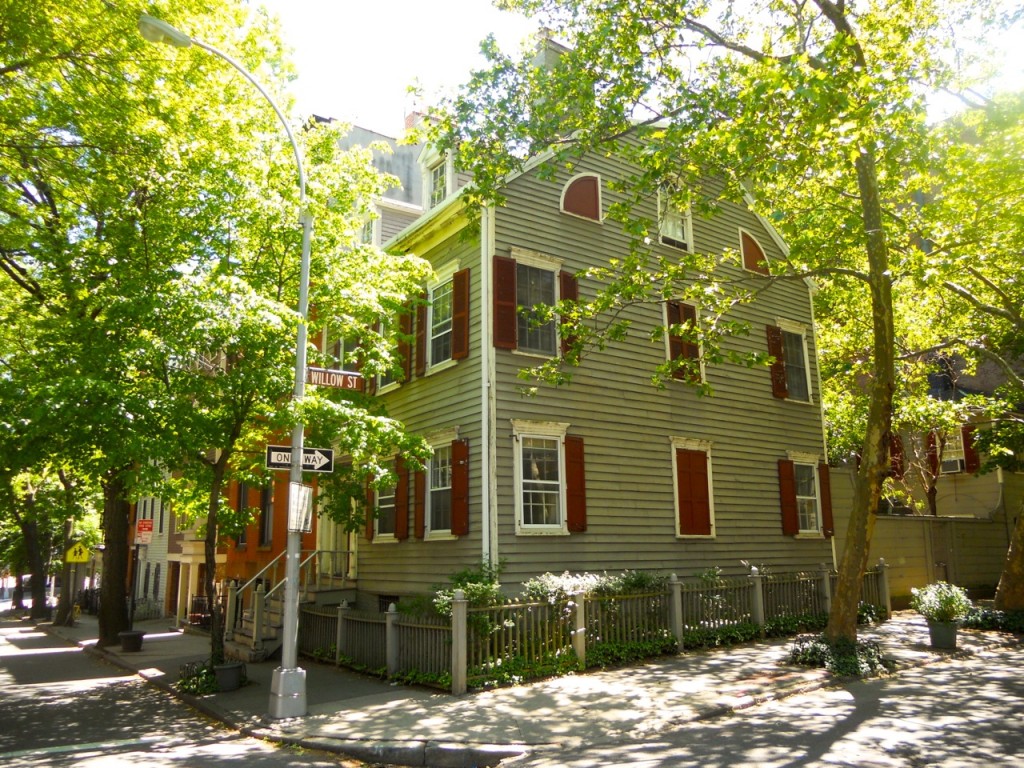 An 1820 home at Middagh St. Photo by Jeff Dobbins

4. When you reach the top of the hill, turn left onto Middagh Street (which looks like more of a path, next to the playground), and walk to Willow Street. This block of Middagh Street between Willow and Hicks holds some of the oldest homes in the city, dating back to the founding of Brooklyn Heights.

Continue south on Willow Street (the street numbers will increase) and notice #37, one of the nation’s first apartment buildings.

5. At the northeast corner of Cranberry and Willow is 19 Cranberry St, home of the Castorini family in the 1987 film Moonstruck. Many of the film’s exterior shots were filmed here, including Cher’s wistful stroll down this block kicking a can.

6. Turn left on Orange Street and walk a block and a half east to #57, Plymouth Church (1849). This historic church was known as the “Grand Central Depot of the Underground Railroad” for the many escaped slaves it sheltered—but it was made famous by its dramatic abolitionist preacher, Henry Ward Beecher. Among those who came to hear Beecher were Mark Twain, Booker T. Washington, and Abraham Lincoln. In fact, so many flocked to hear his sermons that special “Beecher boats” were needed to ferry the throngs from Manhattan! 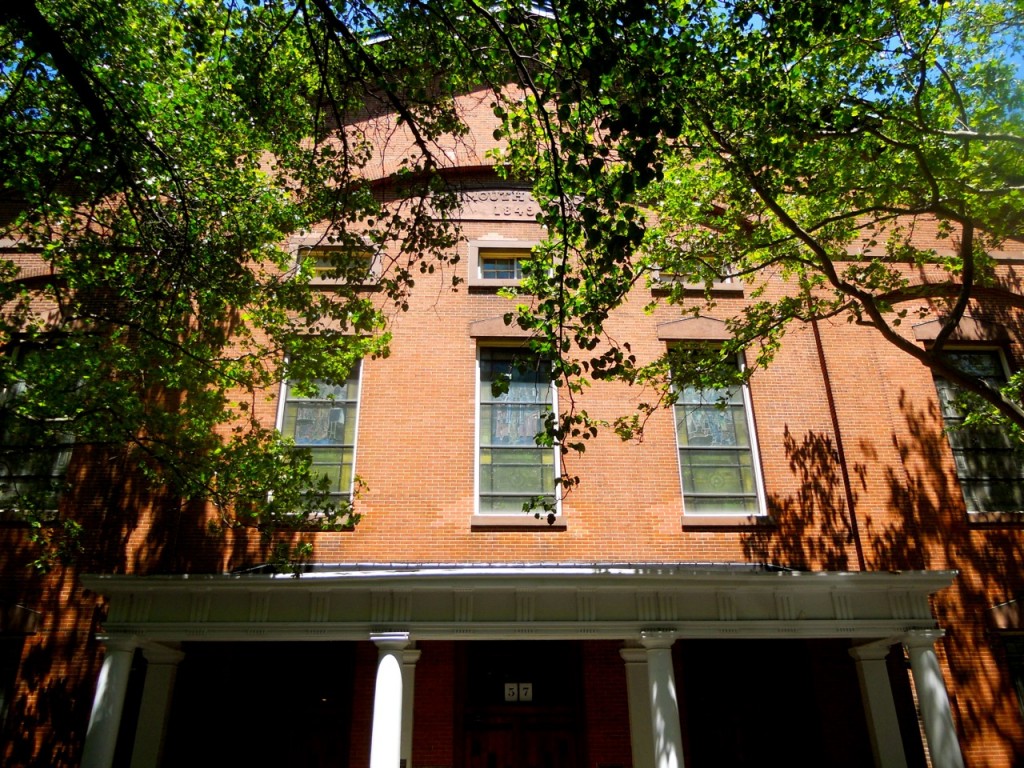 In contrast to the church’s simple, barn-like exterior, its interior is laid out in a theater style (designed by Beecher himself) and features remarkable stained-glass windows (some by Tiffany) and a piece of Plymouth Rock. In the adjoining garden, you can see a statue of Beecher and a relief of Lincoln.

7. Return to Willow Street and continue south (or left). The “modern” building on the southwest corner is a Kingdom Hall of the Jehovah’s Witnesses, one of 30 buildings the group owns in Brooklyn Heights.

70 Willow St., meanwhile, was once Truman Capote’s home; it’s here that the author wrote Breakfast at Tiffany’s and In Cold Blood. In fact, the neighborhood has been home to many great writers, including Arthur Miller, W. H. Auden, Thomas Wolf, Carson McCullers, and Norman Mailer. This house recently sold for a record $12 million (a bargain considering the original asking price: $18 million!).

The long block of Willow between Clark and Pierrpont Streets also features several notable homes, including #102, the Danish Seaman’s Church (a remnant of the area’s busy waterfront); #108-112, ornate Queen Anne buildings with flamboyant terra cotta decoration; #151, a former carriage house converted into a luxury home; and the Federal-style row houses at #155-159.

Look for the skylight in the pavement before #157, which once lit a tunnel leading from #159 to a stable.

8. Turn right on Pierrpont Street and head to the Brooklyn Promenade (or Esplanade) for fantastic views of the Manhattan skyline and the Brooklyn Bridge. The sound of traffic can be heard from the Brooklyn-Queens Expressway, which runs beneath the Promenade. The construction of this highway (and demolition of historic homes) was the catalyst for residents’ demands for landmark status, ensuring the neighborhood’s protection.

The view from the Brooklyn Promenade. Photo by Jeff Dobbins

9. Return to Pierrpont St. and walk four blocks east, past beautiful 19th-century homes in a variety of styles. Notable is the 1890 Herman Behr House (at the corner of Henry St.), with its bays, turrets, and terra cotta sculptures. It later became a hotel, apartment house, and even a brothel run by Xavier Hollander (also known as the “Happy Hooker”!). Number 106 has a unique Art Nouveau style, with stained glass over its bay windows and front door.

10. At the corner of Clinton Street is the Brooklyn Historical Society, home to permanent and changing exhibits and an extensive library focused on Brooklyn and New York. The 1880 building has impressive interiors, and its façade includes terra cotta sculptures of a Viking and Native American over the entrance, as well as busts of Columbus and Ben Franklin higher up.

11. Turn right on Clinton St. and walk to the corner of Montague. Here, you’ll find the 1847 Gothic Revival St. Ann and the Holy Trinity Church. It has a stunning interior of intricate sculpture and stained glass windows by William Jay Bolton (making it the first major installation in America). In addition to worship services, St. Ann’s also has concerts and performances.

Montague Street has always been the main commercial thoroughfare of Brooklyn Heights. The block north of Clinton St. includes three notable banks (all designed to appear monumental): #177 with a grand, vaulted ceiling, #183 resembling a classical temple, and #185 with intricate Art Deco relief work. Montague Street also is lined with shops, cafes, and restaurants—great for a relaxing snack or meal.

12. Walk east on Montague to Court St. and Cadmen Plaza. Lining the plaza are the New York Supreme Court Building, the Victorian Romanesque General Post Office (and a statue of Henry Ward Beecher), and Borough Hall, which was Brooklyn’s City Hall until the borough was consolidated into New York City in 1898.

Still have stamina? Then read on for more great sights south of Montague Street!

A. Walk west on Montague (toward the river) and take a left on Hicks St. to Grace Court Alley, which is lined by brick stables and carriage houses that have been converted to luxurious duplexes. Note the protruding metal hooks that once hoisted supplies to the second floors!

B. From Hicks St., Joralemon is a cobblestone street descending to the river (as other west-bound streets did before being cut off from the waterfront by the expressway). This block is lined with modest Greek Revival row houses. Note the blackened windows of #58, which was gutted and serves as a ventilation chamber for the Lexington Ave. subway line tunnel.

C. Numbers 43-49 Willow Place are an 1846 “Colonnade Row” that resemble an antebellum mansion. Across the street at #46 is a home whose columned porch gives it the look of a fading Southern plantation.

D. Continuing east on Joralemon Street, note the mansion at 236 Henry St., with its working gaslight lanterns. 129 Joralemon St. is a Romanesque mansion with dragon decorative sculptures, and #135 is an 1833 white clapboard house with a wrought-iron porch and lovely garden. 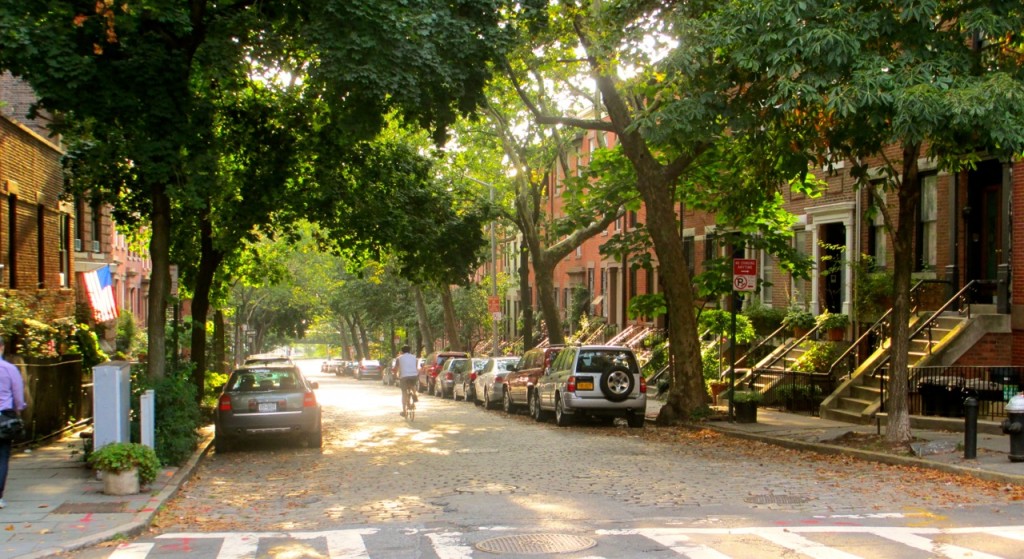