I’m a massive Broadway fan. I’m also a massive Disney fan. In fact, my childhood was a blur of hours spent singing along with my favorite musical numbers and raiding my mother’s wardrobe to make myself into a Disney princess. Almost twenty years later, I’m still just as excited by show tunes, so, when I found out that I’d be heading on the Walks of New York ‘Disney on Broadway Tour’, I was beyond ecstatic!

Being such a massive fan, I’ve had the opportunity to see most of the well-known shows but I was still really looking forward to the tour so that I could get some insider tips about how these amazing productions are put together.

I woke up bright and early on a sunny November morning and made my way to bustling Times Square to meet up with my Disney on Broadway tour group. Our guide for the morning was Jeff, a former actor and theater manager who was just as enthusiastic about exploring the world of Disney on Broadway as I was. 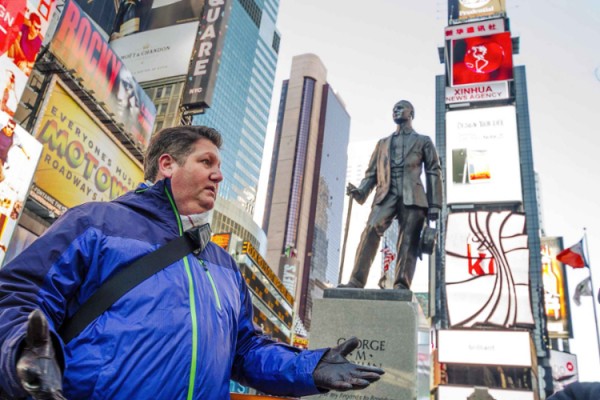 Before we headed off to Broadway itself, Jeff gave us a quick tour of Times Square. Having lived in the Big Apple for almost a year, Times Square was a part of town that I had been warned to avoid by seasoned New Yorkers, due to the massive amounts of tourists. Luckily, Jeff was able to weave our group in and out of the crowds like a true expert, all the while giving us some super interesting facts about the area that I had never known before.

After learning a little more about Times Square’s humble beginnings, Jeff took us to some of his very favorite Broadway theaters including the Broadhurst Theatre, The Shubert Theatre and The Minskoff Theatre. At each stop he regaled us with fascinating Broadway tidbits, told us more about the industry’s movers and shakers and, most importantly, filled us in on the best places to catch a Broadway star for an autograph.

Armed with more knowledge about Broadway than I ever thought possible, it was time to head to the New Amsterdam Theatre for the highlight of the Disney on Broadway tour, a behind-the-scenes look at Disney on stage.

The New Amsterdam has been home to Disney productions on Broadway since 1995. Since then, the company have restored the theater to its former glory and have staged a number of wonderful shows there including ‘The Lion King’ and ‘Mary Poppins’.

The musical playing at the New Amsterdam happened to be my all-time favorite Disney story, Aladdin, so I couldn’t wait to get inside and see what the tour had in store.

Upon arrival, our group was met by a lovely member of Disney staff who whisked us up to the very best seats in the house so that we could take in the theater in all of its glory. The view from these seats was magnificent and really gave me an itch to book tickets there and then.

After learning all about Disney’s history on Broadway from the comfort of our seats, we were lead down a hallway to a secret room that was full of amazing props and costumes from Disney’s Broadway productions. From Mary Poppins’ magical umbrella to the Little Mermaid’s fishtail, this room was the stuff of my dreams! 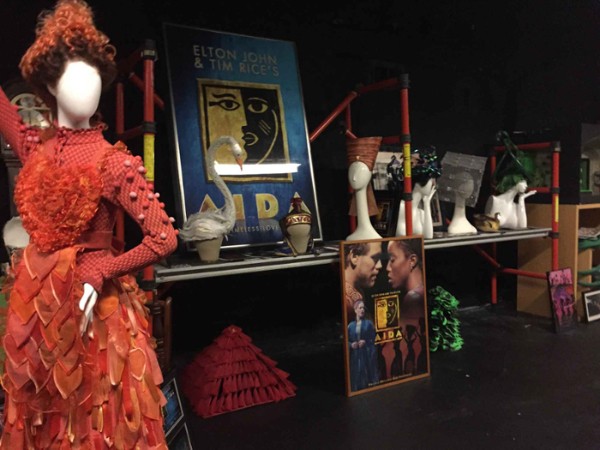 Not only were we given the chance to see these amazing props and costumes up close but we were also encouraged to try the costumes on! Of course, I jumped at the chance and was quickly transformed into a jellyfish from ‘The Little Mermaid’. Taking photos also wasn’t a problem so I was able to snap some pretty amazing Disney themed selfies!

As a fully grown woman, I had the absolute time of my life getting to live out my childhood Disney fantasies on this tour. If you, or somebody you know, is even half the Disney or Broadway fan that I am then this tour is an absolute must on your next trip to the Big Apple.

Does this tour sound like it could be for you? Book your ‘Disney on Broadway Tour’ tickets here.

About the author: This blog post was written by Ruth Aravena, an Irish travel blogger and newly-initiated resident of NYC. She joined forces with Walks of New York to get to grips with the city during her first few weeks of residence. The tours are ours, but all opinions are her own.