The Great Gatsby: A Tale of New York City 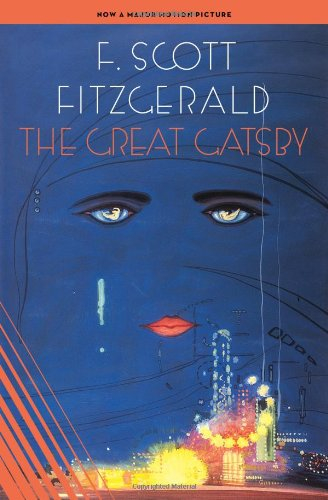 The Great Gatsby: an American classic, but a New York tale

Thanks to the new Great Gatsby movie, all things Gatsby have taken over New York.

But The Great Gatsby was a New York Tale long before Baz Luhrmann reworked F. Scott Fitzgerald’s masterpiece for the screen. (In fact, Gatz, a minimalist, theatrical 6.5-hour reading of the entire novel, sold out its run of performances… twice).

What is it about this relatively brief, 88-year old literary masterwork that continues to resonate with New Yorkers?

The Great Gatsby was inspired by New York City

The Great Gatsby is set in real-life New York City and environs (in the 1920s, of course). Gatsby, the Buchanans, and Nick Carraway live in East Egg and West Egg, Long Island (inspired either by Great Neck or by Westport, Connecticut, where Fitzgerald lived briefly).

Nick, Tom, and Gatsby return to Manhattan regularly (if not daily) for work or “business.” And the revelers who converge on Gatsby’s parties are New Yorkers. 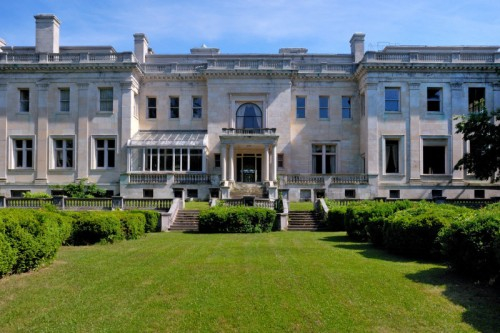 Gatsby’s particular mansion might be fictionalized. But lavish estates like his still exist in Long Island and the tri-state area. Wealthy New Yorkers continue to spend astounding sums on these status symbols, and Manhattanites still flock to the expensive, extravagant parties designed to both impress… and be featured in the press.

And, of course, many of the novel’s key events take place within New York City. Fitzgerald lived in Manhattan, so he knew it intimately. Scott and Zelda’s antics in NYC are legendary; they caroused at wild parties, rode on top of taxis on 5th Avenue, danced on tables at the Waldorf, and leapt into the Pulitzer Fountain outside the Plaza.

“I remember riding in a taxi one afternoon between very tall buildings under a mauve and rosy sky,” Fitzgerald wrote. “I began to bawl because I had everything I wanted and knew I would never be so happy again.”

It’s unsurprising, therefore, that Fitzgerald used New York as the setting for his first three novels and for many of his stories.

Fitzgerald crafted his New York Gatsby scenes with detail and eloquence. Here are the locations of some of his most famous scenes!

The Queensboro Bridge: Sometimes called the 59th Street Bridge, this was the gateway to Manhattan for Gatsby and Buchanan. The story’s narrator, Nick Carraway, muses: “The city seen from Queensboro Bridge is always the city seen for the first time, in its first wild promise of all the mystery and beauty in the world…. ‘Anything can happen now that we’ve slid across this bridge,’ I thought. ‘Anything at all.'” 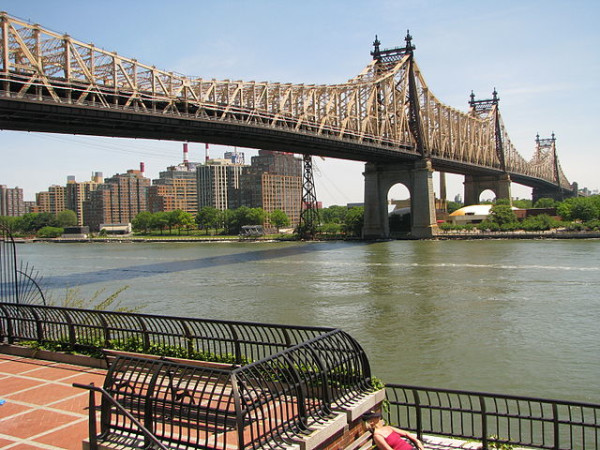 Financial District: Where Nick works as a bond trader and described as “the white chasms of lower New York.”

Midtown Manhattan: Nick describes his daily evening commute from the Yale Club (still extant beside Grand Central), down Madison Avenue, and west on 33rd Street to Old Penn Station (since he doesn’t have a sports car, this is his gateway to NYC).

Later, on a stifling summer day, Jordan suggests taking refuge in one of midtown’s movie palaces.  She says, “I love New York on summer afternoons when everyone’s away. There’s something very sensuous about it—overripe, as if all sorts of funny fruits were going to fall into your hands.” 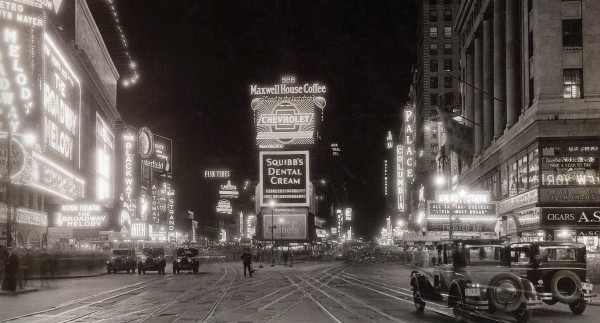 Times Square in the 1920s—as it would have looked to F. Scott Fitzgerald

42nd Street: In a “Forty-second Street cellar,” Gatsby and Nick have lunch and run into enigmatic “business man” Meyer Wolfsheim.

Washington Heights: This neighborhood is home to the W. 158th Street apartment kept by Tom for his assignations with Myrtle Wilson, situated in “a long white cake of apartment houses.” Fitzgerald knew the area well, since he lived on Claremont Avenue when he first came to New York, in 1919.

The Plaza Hotel: Nick and Jordan have tea there. Later, in a Plaza suite, Tom and Gatsby finally confront one another over Daisy, and the heated scene leads to the novel’s tragic conclusion. Fitzgerald knew the Plaza quite well, having frequented it often.

Valley of Ashes. Photo from the Greater Astoria Historical Society

“Valley of Ashes”: The bleak no-man’s land that is a void between lush East/West Egg and glamorous Manhattan. The Corona Ash Dumps, where the Wilsons lived, were piled with ashes from the city’s coal-burning furnaces. In the next decade, Robert Moses would transform the area for the 1939 World’s Fair.

Along with the novel’s locations, its characters are, of course, rooted to New York! These include:

The anonymous pleasure-seekers who crowd Gatsby’s parties. You can still see them around New York: They spend considerable time and money on traversing the velvet ropes of the city’s trendiest clubs, hoping to get “in with the in-crowd”!

Tom and Daisy Buchanan: Wealthy, entitled New Yorkers that sound like, well, the recent Wall Street denizens who were filmed on a balcony, sipping champagne and laughing at protestors’ demands for financial accountability. Nick notes, “They were careless people, Tom and Daisy—they smashed up things and creatures and then retreated back into their money or their vast carelessness or whatever it was that kept them together, and let other people clean up the mess they had made”

George and Myrtle Wilson: Working-class New Yorkers, living in harsh conditions and struggling to survive. They have little education or opportunity to better their lives. Both dream of escaping their lot, and Myrtle will go to desperate lengths to taste the finer things in life.

Nick Carraway: A great example of New Yorkers who feel like outsiders: present yet observing, amongst a crowd yet isolated. Nick says, “At the enchanted metropolitan twilight I felt a haunting loneliness sometimes, and felt it in others.”

Finally, Gatsby and Fitzgerald both are archetypal New Yorkers. Born and bred elsewhere, ambition drove them to New York City.  They were eager to recreate themselves, to succeed, and to prove their worth. While they both attained their dreams quickly, neither could savor them. Gatsby was destroyed at the height of his influence. But it was even worse for Fitzgerald: After his fame with Gatsby, he endured a slow, painful descent.