By Walks of New York on June 13, 2012 in Explore NYC, Neighborhoods, Sightseeing 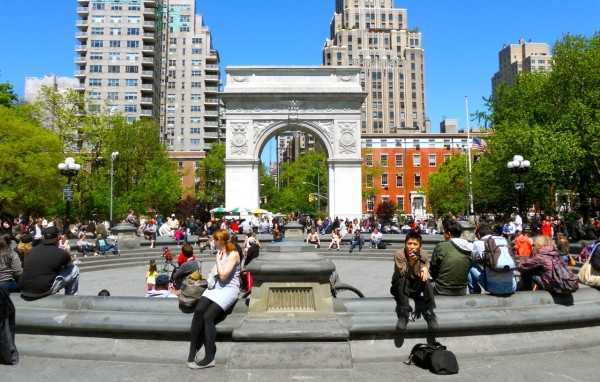 Greenwich Village is one of the most beautiful neighborhoods in New York. Not to mention most historic: On a snowy night in 1917, a ragtag band of artists, poets, and actors occupied the top of Washington Arch to declare the “Free and Independent Republic of Greenwich Village!”

That attempt to “secede,” of course, speaks to the fact that “The Village” has long been a world unto itself… with its own mores and manners. Rich, poor, and bohemians all have shared Greenwich Village’s picturesque, winding streets, infusing the neighborhood with dynamic energy. 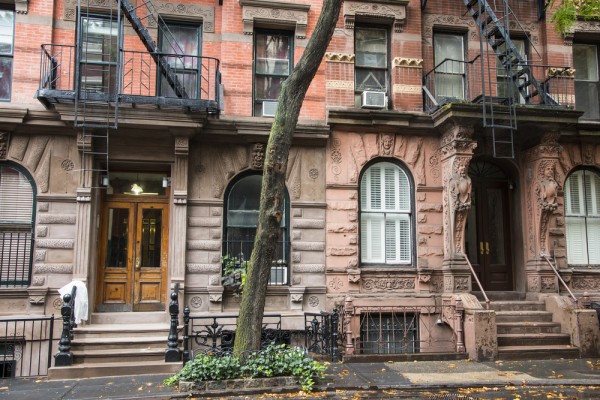 History of the Greenwich Village

Back in the 1660s, British settlers joined Dutch farmers in a pastoral hamlet 1.5 miles north of the city; they called it “Grin’wich,” for Green Village. When outbreaks of yellow fever and cholera in the early 19th century sent city dwellers fleeing “to the country,” the village’s population soared.

By the 1870s, the bucolic enclave for wealthy New Yorkers was filling with poor Irish and Italian immigrants seeking work in the quarter’s warehouses, factories, and sweatshops. 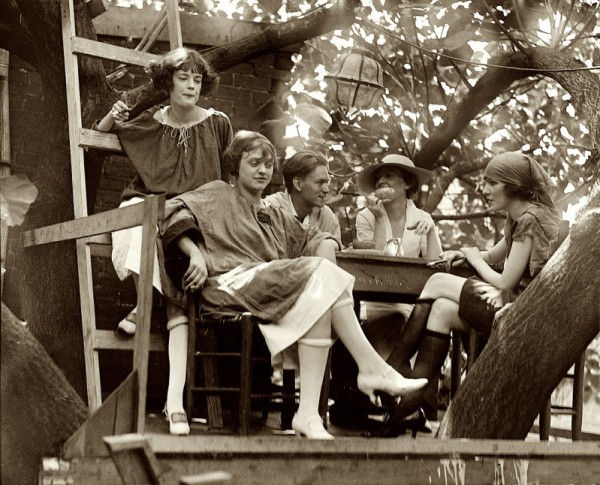 At the dawn of the 20th century, a bohemian community of artists and activists moved in—advocating radical ideas like women’s suffrage, anarchy, and free love.

During Prohibition, the “anything goes” neighborhood was teeming with speakeasies, taverns, and jazz clubs. The liberal climate and cheap rents made the Village a refuge for artists, Beatniks, Hippies, and the gay community.

Despite Greenwich Village’s gentrification (it’s one of the priciest places to live in Manhattan today), that eclectic energy remains!

A walking tour of Greenwich Village

Trying to figure out where exactly to go in Greenwich Village?

We’ve got help! Just follow our handy walking tour, below, to hit the best sights of “the Village.” 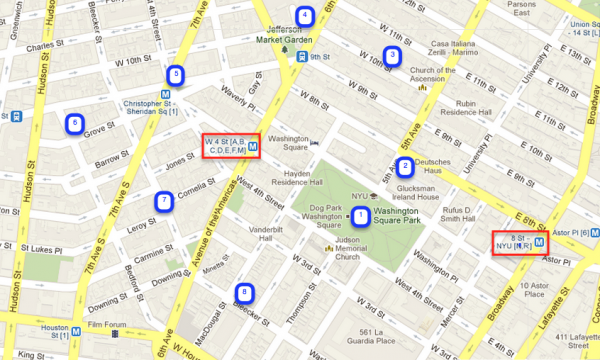 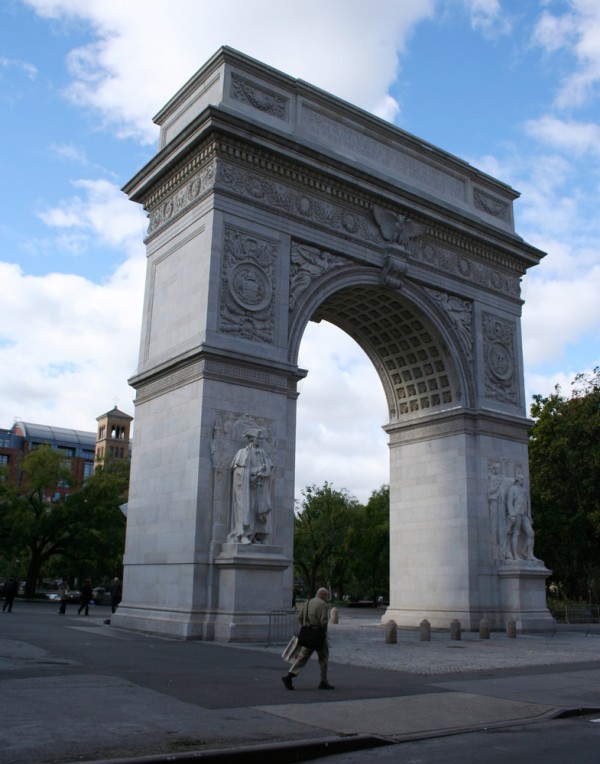 1. Start at Washington Square Park. The heart of the Village, this park serves as a gathering place for neighbors, students, artists, canines (with their obedient walkers), serious chess players, and street performers.

Originally a gruesome gathering spot (in fact, it was a hanging grounds and Potter’s Field), the square became an elegant park in 1827. The grandiose Washington Arch was erected in 1892, replacing an earlier plaster and wood arch that commemorated the centennial of George Washington’s inauguration (which happened in New York City!). Inspired by Paris’ Arch de Triomphe, Stanford White designed the 77-foot marble arch; the north face features the statues “Washington at War” and “Washington at Peace. ” 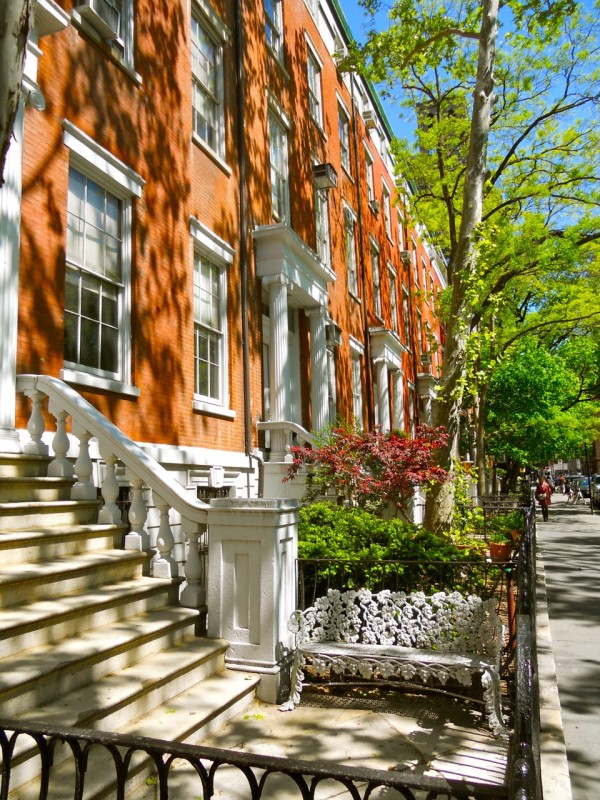 The Row. Photo by Jeff Dobbins

Surrounding the square, meanwhile, is the ever-expanding campus of New York University (look for the purple and white signs and banners), one of the largest private universities in the nation.

2. Fifth Avenue begins north of Washington Arch. Walk up the avenue half a block, and to your right (or east), you’ll find the private alley called the Washington Mews. The small homes on the north side were once stables for The Row, while those on the south were built much later (1930s), in former backyard plots.

One survivor from the street’s glory days is Electric Lady Studios (#52), the recording studio built by Jimi Hendrix where the Rolling Stones, Stevie Wonder, and The Clash all have recorded. 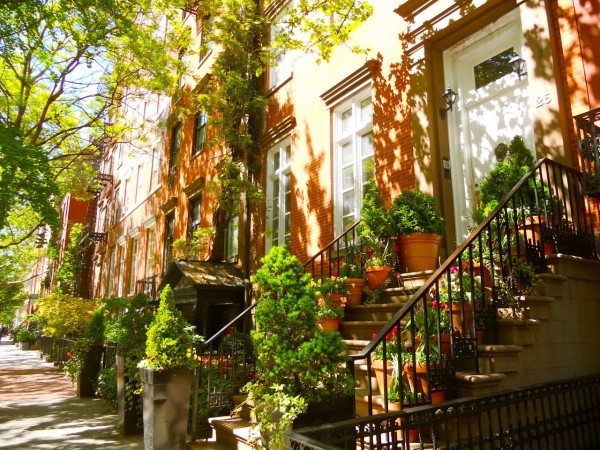 This stretch of Fifth Avenue was once lined with elegant mansions, lavish hotels, and churches. While the churches have survived (Church of the Ascension and First Presbyterian), most other structures were replaced by apartment buildings in the early 20th century.

3. At 7 E. 10th St., you’ll find the Lockwood De Forest House. De Forest shipped the ornately-carved teak bay and trim intact from India. The block of W. 10th St. between Fifth and Sixth Avenues is one of the village’s most beautiful, lined with elegant townhouses in a variety of styles, including English Terrace Row homes with cast-iron communal balconies on the street’s south side.  Mark Twain briefly lived at 14 W. 10th St in the 1850s. 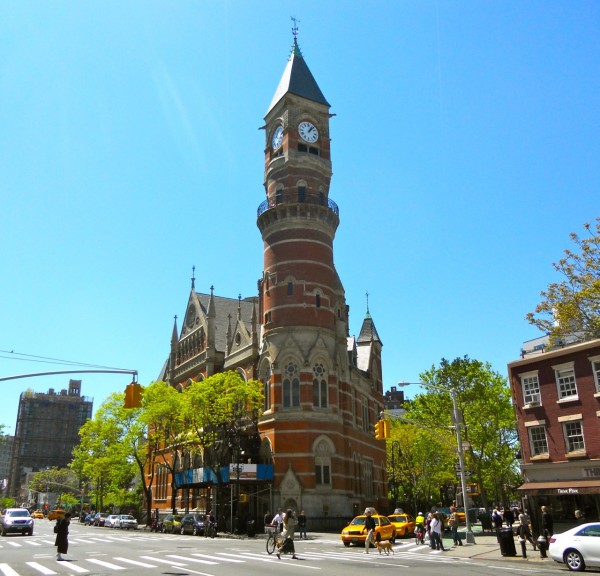 Built in 1875 as a courthouse by architects Frederick Clark Withers and Calvert Vaux (of Central Park fame), the first and second floor reading rooms were courtrooms where famous cases were tried—including Harry K.Thaw’s murder of Stanford White, and of strikers from the Triangle Shirtwaist Factory (two years before the fire that took many of their lives).

Behind the courthouse was an infamous women’s prison where Mae West was jailed on charges of obscenity. From here, inmates often yelled profanities down at passersby. The prison was razed; the plot is now a lovely community garden.

Behind the Library (on W. 10th St. between Sixth and Greenwich Aves.) is Patchin Place, a private cul-de-sac with 10 brick row houses, built in 1848.  Many writers and artists have lived there, including Theodore Dreiser, e.e cummings, and Marlon Brando.

Walk one block south down Greenwich Ave. to Christopher St. and head west (right) into the tangle of West Village streets. When Manhattan adopted a street grid, villagers fought hard to maintain their familiar labyrinth of streets (many following original property lines), explaining the confusion here!

Halfway along the block, you’ll encounter Gay St. on your left; this small, curving street used to be a stable alley. Once home to African-American servants, it later became a haunt for Jazz musicians. 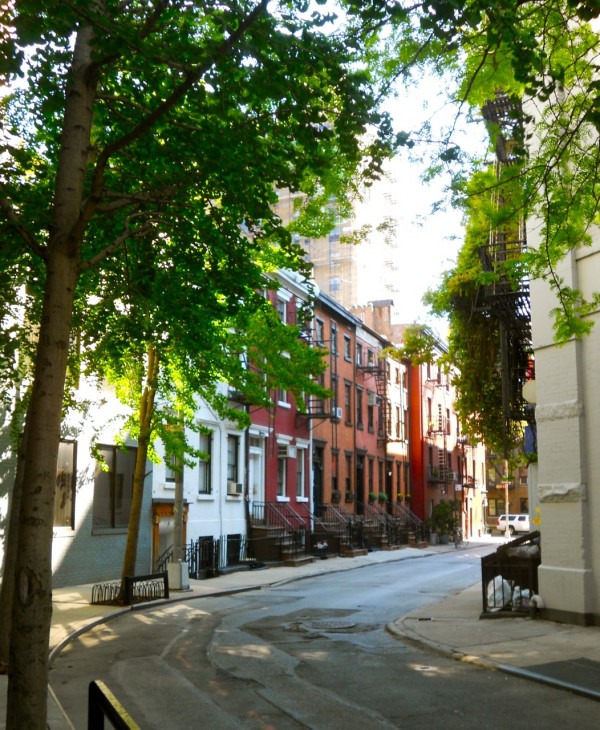 Continue to the corner of Christopher St. and Waverly Place, where you’ll find the triangular Northern Dispensary. Built in 1831, it provided health care to indigent Villagers (among them Edgar Allen Poe).

This was the location of the Stonewall Riots, the watershed event that sparked the Gay Rights Movement. The Stonewall Inn at 53 Christopher is not the original bar—although it’s the same spot. George Segal’s life-sized bronze sculpture (painted white) of two same-sex couples is titled “Gay Liberation.”

6. Follow Grove Street (the southern border of the park) across Seventh Ave. and continue two blocks west. If you’re a fan of American sitcoms, you’ll recognize the southeast corner of Grove and Bedford—the site of the fictional “Friends” home.

Walk south on Bedford to #77; once a freestanding farmhouse, it’s the oldest house in the village (1799). 75½ Bedford is the narrowest building in the city, measuring less than 10 feet wide. Edna St. Vincent Millay and Cary Grant briefly lived there (not together!). 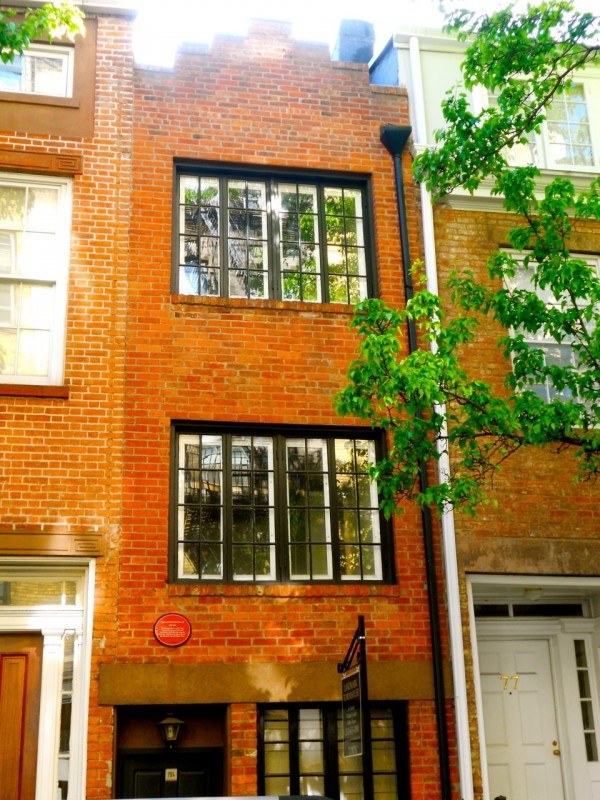 7. Continue along Bedford, crossing Seventh Ave. (again), and turn left (north) on Leroy St., which ends at Bleecker Street. This area was the heart of the Italian immigrant community, and there are still wonderful restaurants and shops like John’s Pizzeria, Faiccio’s butcher, Murray’s Cheese, and Rocco’s Pasticceria (fans of cannoli, take note!).

Take a right on Bleecker and continue to Sixth Ave., passing Our Lady of Pompeii, the spiritual hub for neighborhood Italians.

8. Across Sixth Avenue to your left is Minetta Street, which follows the curve of the brook that still runs beneath. (“Manetta,” the original Native American name, meant “Devil Water!”).

The four blocks of Bleecker between Sixth Ave. and West Broadway were the main stomping ground of the Beatniks, the 60s Folk music revival, and the off-Broadway movement. The street was lined with jazz clubs, coffee houses, and theaters. It’s still a center of nightlife today!

As you stroll Bleecker, look for the old artists’ garrets above #172-176, and the marquee at #159 reading “The Market NYC”; this was once Circle in the Square, an important off-Broadway theater.

Across the street you’ll see “Mills House No. 1,” above the entrance to #160. This was a hotel and flophouse for poor and working-class men, charging 20 cents a night. Ironically, and in an example of how Greenwich Village has changed, it now houses luxury co-ops! The building also held the famed jazz club, The Village Gate.

Other notable music venues at hand include Kenny’s Castaways (showcased many famous musicians, including Bruce Springsteen), The Red Lion, and the Bitter End (NYC’s oldest rock and roll club). 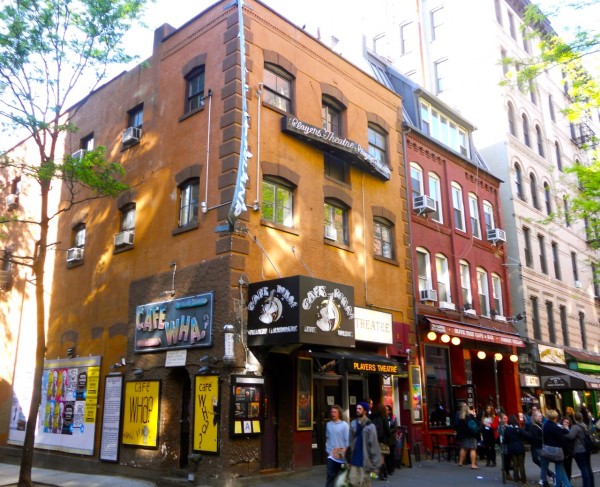 Double back to MacDougal Street and turn right (north).  Another legendary center of nightlife, this block is packed with restaurants, food stands, clubs, and taverns (even a few old-school basement bars!).  Notable venues include Minetta Tavern, Café Wha? (which presented Bob Dylan, Jimi Hendrix, Peter, Paul & Mary, and Bill Cosby), and Café Reggio (the Village’s oldest coffee house and a hangout for the Beats, including Jack Kerouac).

At 133 MacDougal is the historic Provincetown Playhouse, a converted stable where Eugene O’Neill premiered many of his greatest plays. At the corner of West 4th Street, you’ll return to Washington Square Park.

If you choose to take the subway at the West 4th Street stop, look for the basketball court at the corner of West 3rd and Sixth Avenue. (there’s usually a crowd around the chain-link fence). This is the famous court known as “the Cage,” where players from all over the city come to play “Streetball.”