Till Death Do Us Part: The Love Story of Jonathan Reed 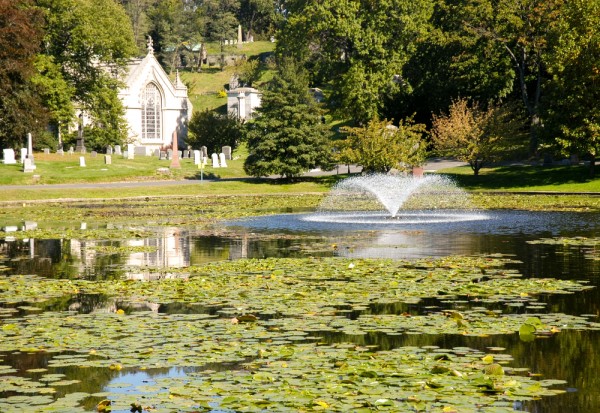 Greenwood Cemetery, where Jonathan Reed spent many of his days…

Brooklyn merchant Jonathan Reed was devoted to his wife Mary. When she died in 1893, he bought a mausoleum in Greenwood Cemetery, Brooklyn, in which she was laid to rest, along with an empty coffin for him.

According to the New York Times, Reed furnished the tomb “just like a living room in a fine house”—including an oil stove, paintings, a clock, photos of Mary from childhood until her death, her half-finished knitting, and even their pet parrot (first living, later stuffed).

Each morning, Reed arrived as the cemetery opened saying, “Good Morning, Mary, I have come to sit with you.” He remained in the tomb all day, talking to Mary, dining off their wedding china, and reading to her until he was compelled to leave in the evening.

Word of Reed’s vigil began to spread, and soon company was stopping by. By his account, 7,000 people visited in the first year alone. The Reeds began receiving guests from around the globe, including seven Buddhist monks who’d traveled all the way from Burma, believing Reed knew something of life after death.

Increasingly, ladies began to call, to whom Reed explained he promised never to leave his wife. Besides, he insisted Mary was not dead; the warmth had simply left her body. If he kept the mausoleum warm, she would continue to sleep peacefully.

Over ten years, Reed never missed a day visiting. In 1905, he was found on the mausoleum floor, his arms stretched out toward Mary. Having died of a stroke, Reed was laid to rest beside his beloved wife, and the tomb was finally locked. The key has since disappeared.

Visiting The Empire State Building: What You Have to Know
Notes from Liberty Square: Home of the OWS Movement