NYC celebrates America’s Independence Day with a colossal show: the Macy’s Fourth of July Fireworks.  Barges in the Hudson River will launch thousands of fireworks in a 26-minute show that is synchronized to a musical score, creating the nation’s largest pyrotechnic spectacle.  And this year, that most iconic structure of the NYC skyline, the Empire State Building, will join the explosive finale with a complimentary light show. 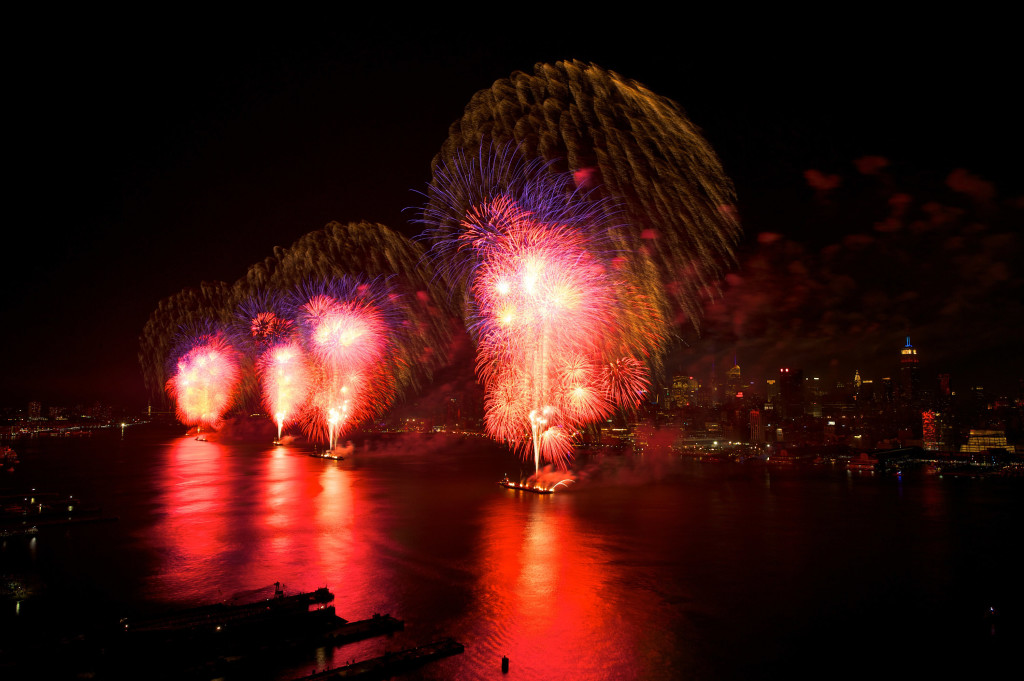 Macy’s Fourth of July Fireworks extravaganzas have been an NYC tradition since 1976.  Not content to be the nation’s largest, every year Macy’s seeks to outdo the previous show by increasing the number of shells and introducing innovative pyrotechnical tricks.  This year’s show will feature 40,000 effects created by shells from all over the world.  At 9:25pm four barges in the Hudson between 24th and 42nd Street will fire an average of 1,800 shells per minute over 1000 feet into the skies above NYC.  The display is “choreographed” to a score of pop, country, and patriotic songs that can be heard on local radio stations 1010 WINS AM or Z-100 FM.

This year the grand finale will be even more spectacular as the Empire State Building joins the act with its new LED tower lights.  The one-of-a-kind lighting, which is capable of creating a vast array of colors, combinations, and effects, will be choreographed to the music, and also mirror the explosions. 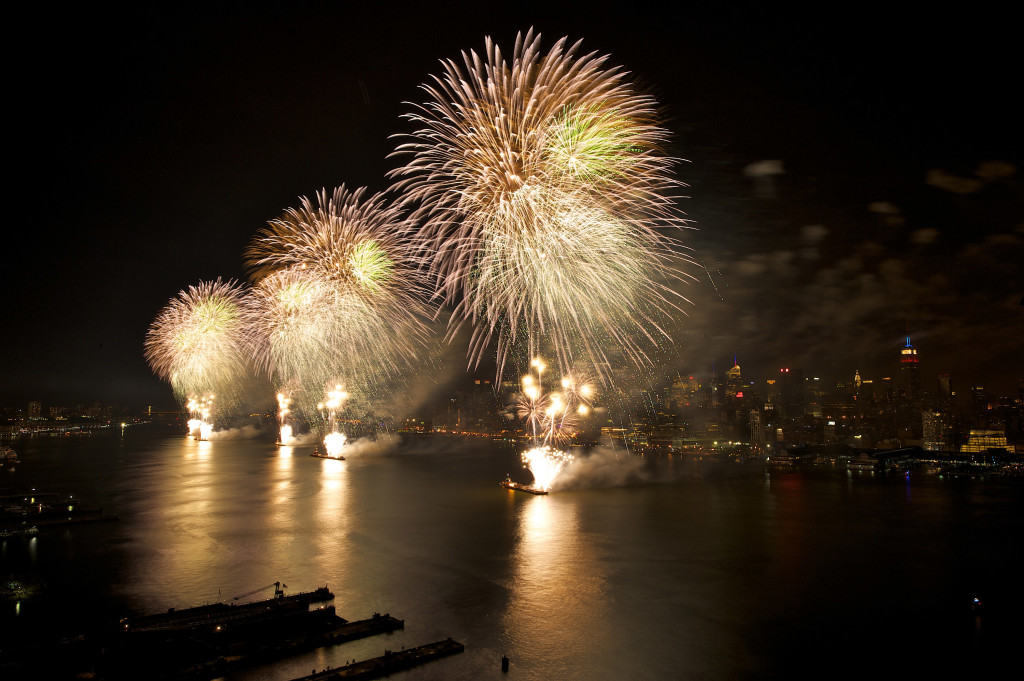 As many of three million spectators will line the banks of the Hudson to watch the awesome show (and millions more watching on TV).  Prime public viewing will be set up between 14th and 59th Streets along the West Side Highway, as well as selected side streets between 11th & 12th Avenues.  NOTE: because of the eastward curve of lower Manhattan’s coastline, waterfront areas below 14th Street are not good for viewing. 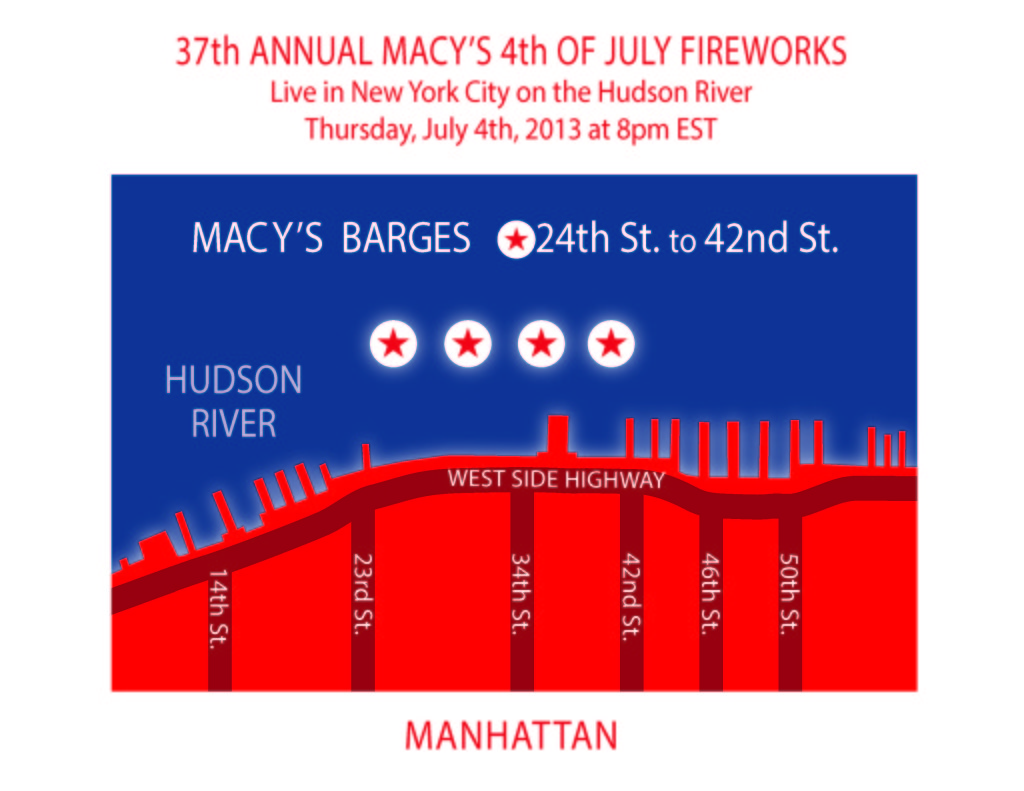 Map of the prime viewing areas.

The NYPD will monitor the viewing areas, closing access blocks as they fill up. Spectators will be re-directed to open access blocks, and all access points will be determined by NYPD and are subject to change.  Spectators should not bring lawn chairs, blankets, backpacks/containers or other large bags. NYPD will conduct security screenings.

Viewing for people with disabilities will be available at Dewitt Clinton Park located on West 52nd Street and 11th Avenue.

Parking is not available in the viewing areas.

Those who can’t attend the fireworks can watch them on NBC-TV’s live broadcast. The two-hour show will feature performances by pop and country music stars in addition to the pyrotechnic spectacular.  In NYC, the broadcast begins at 8pm on WNBC (4 New York). Other areas check your local listings. 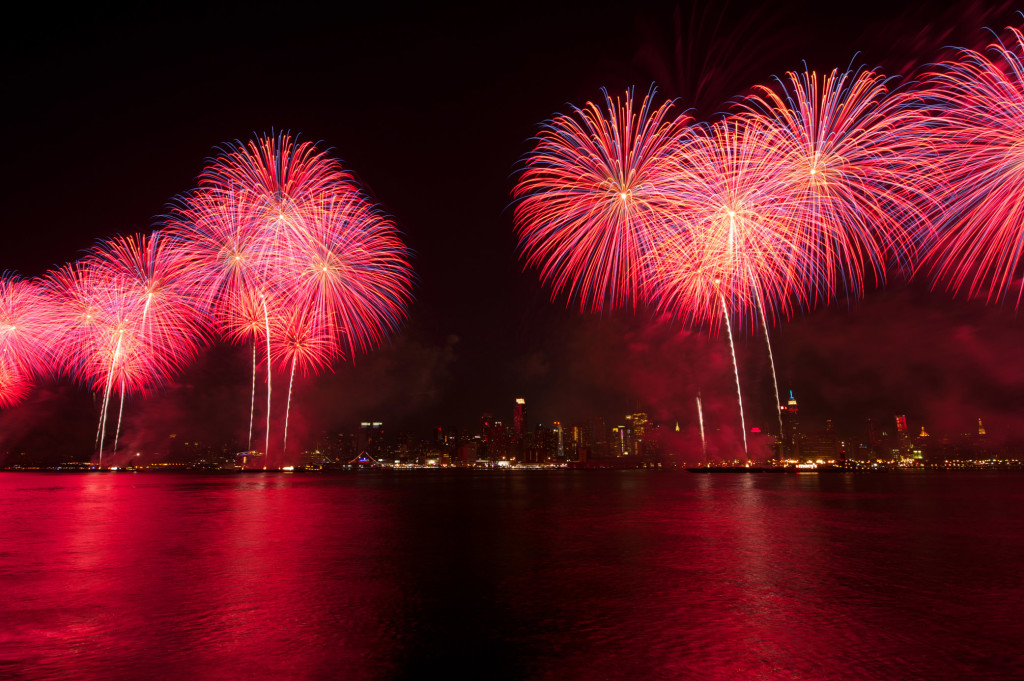 This video, featuring Macy’s Fireworks Executive Producer, Amy Kule, provides a glimpse behind the scenes of the pyrotechnics blow-out.