Manhattan is laid out on a uniform grid of streets and avenues (well, most of it), making it easy to navigate. 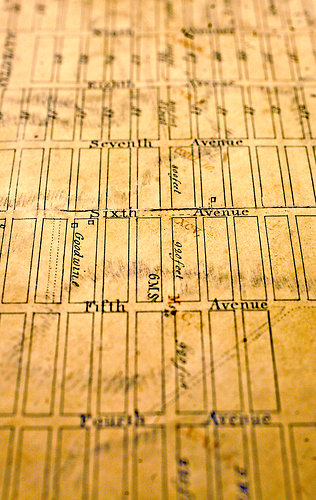 Streets run east-west.  The majority of streets are numbered (as opposed to having proper names).  Street numbers ascend as they move northward, from 1st street in Greenwich Village to 220th street in the Inwood section.

Avenues run south-north, with numbers beginning on the east side of the island and ascending to the west.  Apart from numbers, Lexington, Park and Madison Avenues (east-west in that order) run between 3rd and 5th Avenues.  6th Ave. is also called Avenue of the Americas. (For more Avenue name variations, see below)

City blocks vary in size, and are generally much longer in between avenues, and shorter in length between streets.  Twenty city blocks (measuring north-south) are equivalent to 1 mile (1.6 km).

The grid begins north of Houston Street, since the area to its south was well established when the grid came to be in 1811.  The streets and avenues of Southern Manhattan have proper names and often run in irregular directions.  The street layout of the West Village defies logic and can be particularly difficult to navigate.

Broadway, one of Manhattan’s oldest thoroughfares (and the world’s longest) runs perpendicularly as it progresses north from the tip of Manhattan up into the Bronx.  As it criss-crosses the straight avenues, it creates large, open intersections (Union Square, Madison Square, Herald Square, Times Square, Columbus Circle, etc.).

In the East Village, there are four additional avenues beyond 1st Avenue: Avenue A eastward to Avenue D.  This area is often called “Alphabet City.”