“This is not your city of residence, Dr. King, but it is your city nevertheless…We claim you, henceforth, as an honorary New Yorker.”  With these words, Mayor Robert F. Wagner presented Martin Luther King Jr. with the Medallion of Honor of the City of New York in 1964.  New York City played a significant role in King’s life and legacy. 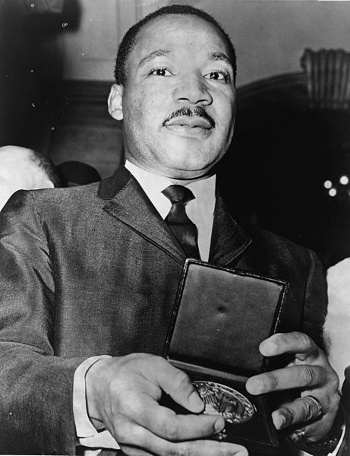 Dr. King’s first national support came from New York-based organizations such the National Urban League and Harlem churches with community reach, such as the powerful Abyssinian Baptist Church.  King regularly traveled to NYC, meeting civil rights leaders like Adam Clayton Powell Jr., Bayard Rustin, and Eleanor Roosevelt (in her newspaper column, she shared how moved she’d been hearing King speak, and her courageous support for the cause of desegregation).

In the first biography of Dr. King (“Crusader Without Violence” 1959) Lawrence Reddick wrote, “Whenever he is in New York for several days, King tries to get in at least one Broadway or little theatre show.  He has seen “Mr. Wonderful,’  ‘South Pacific’ and ‘Damn Yankees.’”

In 1958, Dr. King was autographing copies of his first book, “Stride Toward Freedom,” in a Harlem department store when Izola Ware Curry stabbed him in the chest with a sharp letter opener.  King was rushed to Harlem Hospital where his near-fatal wound was treated.  Ms. Curry was taken to Bellevue Hospital, where she was diagnosed as a paranoid schizophrenic.  Dr. King wrote: “The experience I had in New York gave me time to think.  I became convinced that if the movement held to the spirit of nonviolence, our struggle and example would challenge and help redeem not only America but the world.”

In 1961, Dr. King spoke at New York University about the philosophies of non-violent protest and the civil rights struggles.  Months later, Mayor Wagner declared May 16th ‘Desegregation Day’ in honor of King.

Riots broke out in Harlem in the summer of 1964 after the shooting of a 15-year-old by an off-duty police officer.  Mayor Wagner asked Dr. King to come to NYC on a peace mission.  During a speech in Harlem, Black Muslims (who demanded more aggressive methods to acheive racial equality), threw stones at Dr. King.

On April 4, 1967 Dr. King delivered his famous “Beyond Vietnam” speech at Manhattan’s Riverside Church.  King described a war that was morally wrong and that drained money that should be dedicated to America’s war on poverty.  “We were taking the black young men who had been crippled by our society and sending them 8,000 miles away to guarantee liberties in Southeast Asia which they had not found in Southwest Georgia and East Harlem.”

On April 15th, Dr. King led New York City’s largest anti-Vietnam War demonstration as 100,000 protesters marched from Central Park to the United Nations.  In less than a year, he would be assassinated in Memphis.

Ongoing – See “The Mountaintop,” the new Broadway play that is a fictional enactment of Dr. King’s last night.  The show stars Samuel L. Jackson as Dr. King and Angela Bassett as his mysterious hotel maid.  For tickets and information, see the show’s website.

January 14-16, 2012
NYC Coalition Against Hunger continues Dr. King’s anti-poverty legacy with the MLK Serve-a-Thon, in which volunteers assist with citywide anti-hunger programs.  For information about volunteering or to make a donation, go here.

Brooklyn Children’s Museum celebrates MLK all weekend with kid activities that explore his contributions to society.  On Monday, veteran civil rights activist Yolanda Clarke will talk about taking part in the March on Washington D.C. when Dr. King delivered his “I have a Dream” speech. Check the museum’s calendar for a complete schedule.  Free with admission: $7.50

January 15, 2012
Martin Luther King Jr. Remembrance Day: Occupy Wall Street. New York Society for Ethical Culture hosts this panel discussion about the significance and future of Occupy Wall Street, including activists with a range of perspectives on the movement.  11:15am; free. website

January 16, 2012
10:30am – 26th Annual Brooklyn Tribute to Martin Luther King Jr., the largest public tribute to Dr. King, it will feature musical performances by Toshi Reagon and BIGLovely and The Institutional Radio Choir C.O.G.I.C. of Brooklyn, as well as a screening of the documentary, “The Black Power Mixtape 1967—1975.”  Tickets are free (one per person). More information is available here.

1:00pm – Learn about Dr. King and the Civil Rights Movement on Harlem Heritage’s Martin Luther King Civil Rights Multimedia Tour.  See some of Harlem’s most historic sites, including many visited by King, led by a neighborhood guide. Tickets and information are here.

Evening – The top of the Empire State Building will be lit in Red, Black, and Green in honor of MLK Day.

“Everybody can be great because anybody can serve…You only need a heart full of grace. A soul generated by love.”
Martin Luther King Jr.