“If I can make it there, I’ll make it anywhere…”  True, Abraham Lincoln never belted this chorus doing “jazz hands,” but his 1860 speech at NYC’s Cooper Union put him on the national political map. 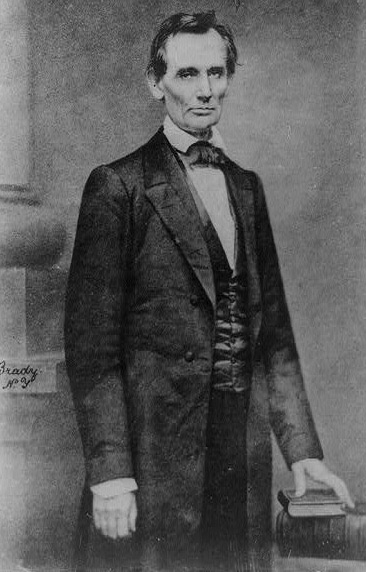 In 1859, Lincoln was invited to lecture by Plymouth Church, the progressive Brooklyn congregation where Henry Ward Beecher railed against slavery.  A semi-name for his performance in the Lincoln-Douglas debates the previous year, Lincoln realized this was his chance to present himself to astute New Yorkers and to refute rumors that he was an uneducated, inexperienced Western clod.  With presidential aspirations, Lincoln had everything to prove.

Lincoln arrived in NYC on February 25, 1860 and was met by…no one.  The following day he traveled to Brooklyn to attend a service at Plymouth Church, and the morning of the speech he sat for a portrait by photographer Matthew Brady (which would later become famous as the source for numerous engravings).

On February 27, the auditorium of Cooper Union (a free night college for working men and women) was filled with 1500 spectators, curious to hear Lincoln speak.  The New York Tribune reported, “He was tall, tall — oh, how tall, and so angular and awkward that I had, for an instant, a feeling of pity for so ungainly a man. His clothes were black and ill fitting, badly wrinkled. His bushy head, with the stiff black hair thrown back, was balanced on a long and lean stock. I said to myself: “Old fellow, you won’t do. It is all very well for the Wild West, but this will never go down in New York.”

Lincoln began speaking about whether the founding fathers’ intended the government to regulate slavery, which he referred to as “an evil.”  Proving himself a scholar, he methodically sited every precedent proving they indeed endorsed federal regulation.  He then addressed Southern politicians, who were threatening to succeed from the union, and would tolerate no compromise on the subject of slavery. 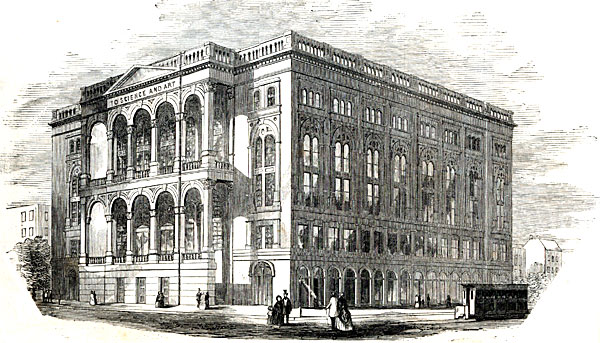 In words that still ring true, Lincoln stated politicians of differing values should argue their positions, but have, “no right to mislead others, who have less access to history, and less leisure to study it, into the false belief that “our fathers who framed the Government under which we live” were of the same opinion – thus substituting falsehood and deception for truthful evidence and fair argument.” He chided the politicians’ contentious manner, and called their repeated false accusations, “simply malicious slander.”

Joseph H. Choate, who attended, later remembered, “When he spoke, he was transformed; his eye kindled, his voice rang, his face shone and seemed to light up the whole assembly. For an hour and a half he held his audience in the hollow of his hand. “ That audience, now on the edge of their seats, occasionally burst into applause and cheers.

Lincoln continued, “Your purpose, then, plainly stated, is that you will destroy the Government, unless you be allowed to construe and enforce the Constitution as you please, on all points in dispute between you and us. You will rule or ruin in all events.  Neither let us be slandered from our duty by false accusations against us, nor frightened from it by menaces of destruction to the Government… LET US HAVE FAITH THAT RIGHT MAKES MIGHT, AND IN THAT FAITH, LET US, TO THE END, DARE TO DO OUR DUTY AS WE UNDERSTAND IT.” 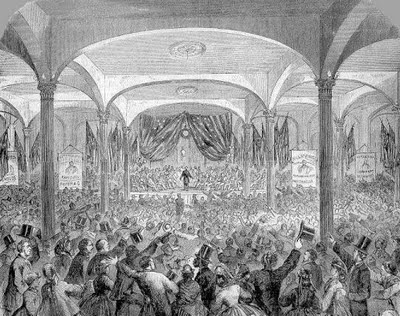 The previously snarky New York Tribune wrote, “Presently, forgetting myself, I was on my feet with the rest, yelling like a wild Indian, cheering this wonderful man. When he reached a climax, the thunders of applause were terrific.  It was a great speech. When I came out of the hall, my face glowing with excitement and my frame all-aquiver, a friend, with his eyes aglow, asked me what I thought of Abe Lincoln, the rail-splitter. I said, ‘He’s the greatest man since St. Paul!’ And I think so yet.”

The speech was an instant success. It was reprinted in full the next morning in the major New York newspapers, and later in other cities.  Biographer Isaac Arnold asserted that night at Cooper Union “probably did more to secure his nomination, than any other act of his life.” Lincoln himself said, “Brady and the Cooper Institute made me President.”

Lincoln visited NYC two more times.  As president elect, he briefly passed through on his way to Washington D.C. in 1861.  Finally, on April 24, 1865, the funeral train carrying Lincoln’s body back to Springfield, Ill. arrived.  In a massive outpouring of grief, the city virtually shut down, black crepe and signs of mourning were everywhere, and church bells rang from most steeples.  160,000 New Yorkers marched in a funeral parade (including 200 black men bearing a banner reading, ‘Abraham Lincoln- Our Emancipator.’)  Lincoln’s casket was laid in state at City Hall, where more than 150,000 mourners paid their respects. 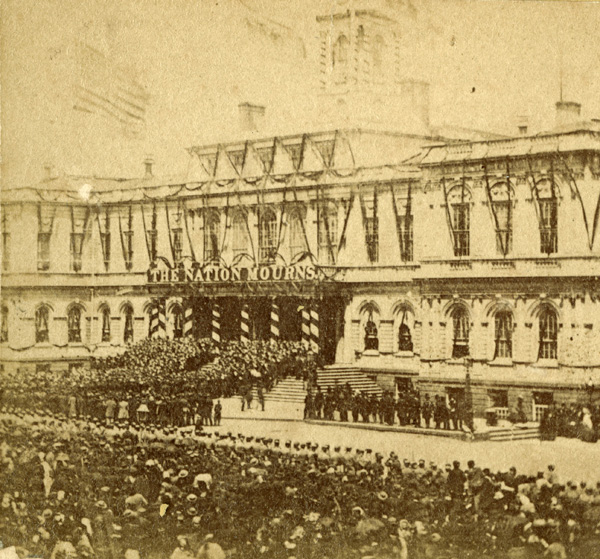