By Walks of New York on October 15, 2013 in Explore NYC, Sightseeing 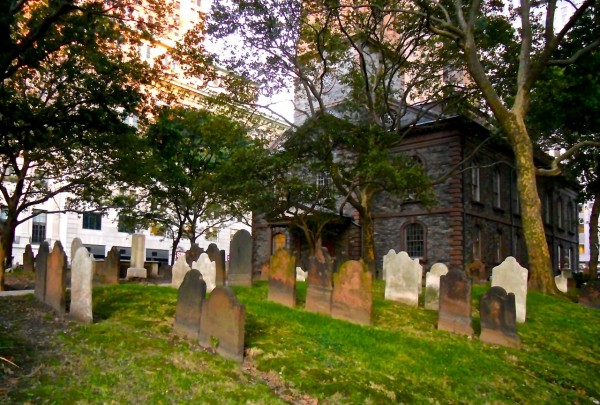 The ancient (and haunted!) churchyard of St. Paul’s Chapel. Photo by Jeff Dobbins

Some New York cemeteries are lovely, some are creepy, and some are… haunted.

And that shouldn’t come as a surprise. After all, New York City has always been crowded. Space and real estate are such limited (and valuable) commodities that disposing of the dead has posed some unique challenges. Potter’s fields have become treasured parks (including Washington Square Park and Bryant Park), and several cemeteries (and their inhabitants) have been moved more than once.

So it’s little wonder that in many NYC cemeteries… the deceased don’t always rest in peace. Here are some of the spookiest haunted cemeteries in New York!

St. Paul’s Chapel Churchyard: St. Paul’s Chapel is New York’s oldest public building in continuous use (George Washington prayed there), and its churchyard holds burial stones dating back to 1704. The graveyard’s residents include British actor George Frederick Cooke, who was buried there in 1812.

Bizarrely, Cooke was interred without his head, having pledged it to science to settle his medical bills. (His skull later made a comeback as a prop in several productions of Hamlet). Cooke’s spirit is seen roaming the churchyard, eternally searching for his missing head.

Trinity Churchyard: This historic neo-Gothic church on Wall Street is the final resting place of Revolutionary War heroes and Founding Fathers, including Robert Fulton and Alexander Hamilton. The graveyard has become a popular spot for Wall Streeters, who enjoy lunch among headstones dating back to 1681. 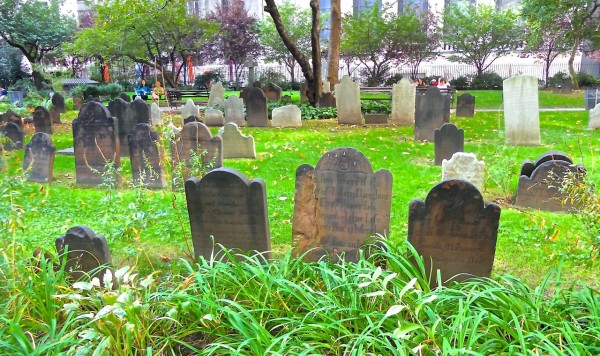 Amongst the yard’s occupants is a jovial spirit whose tombstone simply reads “comedian.” While passing his grave, many have distinctly heard laughter. The Trinity staff, it’s said, has grown accustomed to this mirth from beyond the grave.

St. Mark’s in-the-Bowery burial grounds: It would be easy to miss the burial grounds outside this historic church (New York City’s second oldest), since there are no traditional tombstones. 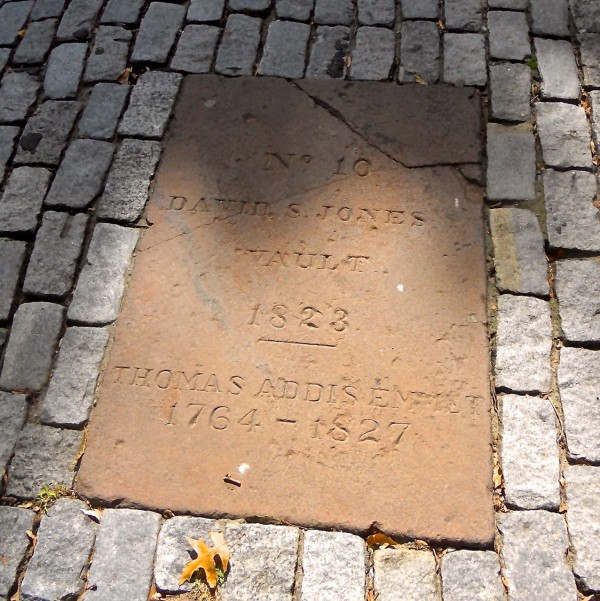 Marker for a family vault in St. Mark’s in the Bowery’s Churchyard. Photo by Jeff Dobbins

Instead, inscribed stone markers on the ground denote subterranean vaults in which wealthy, early 19th-century New York families were placed. Four ghosts reportedly live in the church, including Peter Stuyvesant, the legendary governor of New Amsterdam, whose wooden peg leg is heard pacing the aisles. He’s even been known to disrupt services by singing hymns in Dutch… before disappearing into a wall.

A particularly macabre incident on the grounds occurred in 1878 when the corpse of wealthy department-store owner A.T. Stewart was dug up by thieves and held for ransom. Is it any wonder the undead patrol the grounds?

Green-wood Cemetery: This bucolic necropolis features rolling hills and remarkable sculpture and architecture. Founded in 1838, the cemetery was one of 19th-century America’s greatest tourist attractions.

But visitors sometimes view more than expected. Eerie, ghost-like images frequently appear in photographs taken on the grounds. Guests might also encounter Mabel Douglass, who disappeared on Lake Placid before her body was found at the bottom of the lake, petrified and perfectly intact 30 years later. Now buried at Green-wood, Douglass’ spirit is seen roaming the cemetery. 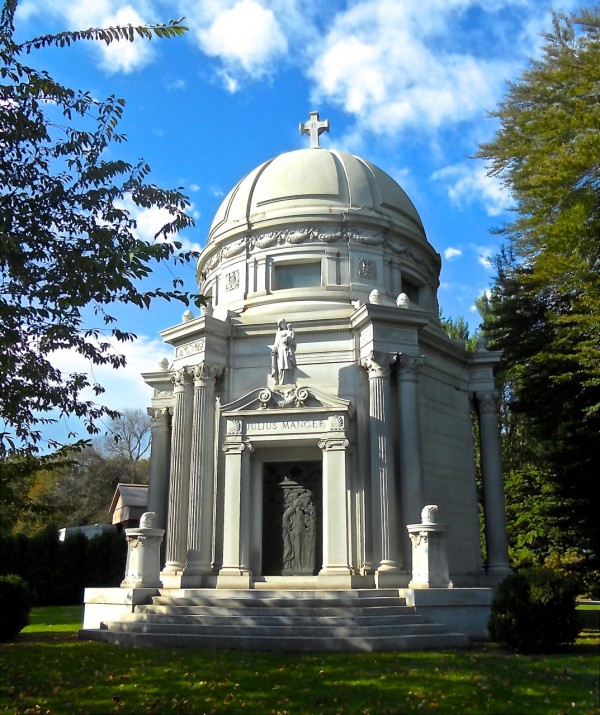 Woodlawn Cemetery: This famed “Garden Cemetery” is admired for its beautiful grounds and spectacular mausoleums, many designed by New York’s most famous architects. Established in 1863, it is the final resting place of 300,000, including Duke Ellington, Fiorello LaGuardia, Miles Davis, and Celia Cruz.

One resident who isn’t resting so peacefully is a mysterious old man with a flashlight, seen (but never heard) yelling wildly beside the Frankie’s Castle monument.

St. John Cemetery: Located in a residential neighborhood of Queens, St. John is home to some of New York City’s most famous citizens (like Geraldine Ferraro and Robert Mapplethorpe)… and its most infamous (including Lucky Luciano, John Gotti, and members of notorious crime families).

Visitors report plenty of unnatural happenings, including weird sounds emanating out of thin air or being enveloped in bizarre cold spots. 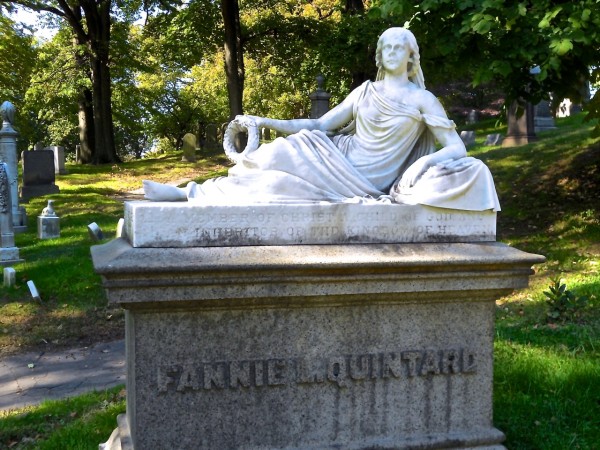 Of course, as with most tales of the undead, these supernatural encounters are primarily anecdotal. Still, who doesn’t love a chilling ghost story?