Craving something sweet?  Well, New York offers some incredible desserts.  The city has many creative confectioners, and you’ll find everything from stuffed cupcakes to bacon-infused treats to homemade Rose Raspberry ice cream with Pink Peppercorn.  To help satisfy your sweet tooth, here are some of New York’s most decadent desserts.

WARNING: The following may induce cravings…

Stuffed Cupcakes – It all started when Keith Jaret, a CIA graduate and classically-trained Chef, and his wife Maureen, a baker, found a recipe for a peanut butter mixture.  Keith’s favorite candy was Reese’s Peanut Butter Cups, and they had an epiphany: wouldn’t it be fun to enjoy this inside of a cupcake?  They were running a bakery in New Jersey and decided to test the idea on their brunch customers.  It was a hit!  Today, New Yorkers can savor these indulgent cupcakes in 185 different flavors hand-stuffed with jellies, custards, creams and mousses at Frozen Peaks in the West Village.  The couple’s love of rock music is reflected in flavors like Bennie and the Jets, a dark chocolate cupcake stuffed with chocolate mint mousse and topped with mint whipped cream; All Shook Up, a banana chocolate chip cupcake featuring a peanut butter mousse filling and topped with vanilla icing and banana and chocolate chips; and In-a-gadda-da-vida, which is a caramel cupcake stuffed with apple and cinnamon filling and vanilla icing and some filling on top.

Chocolate Cremeux – At Chef Charlie Palmer’s Michelin-starred restaurant Aureole, you’ll find one of NYC’s most decadent desserts: The Chocolate Cremeux.  Designed by Pastry Chef Pierre Poulin, the layers of the multi-faceted dessert look like this: rich Madagascan chocolate cream, Valhrona crunch chocolate pearl cereal, rich Caramelia Chocolate made with caramelized sugar, Oreo cookies, a dark chocolate disc, chocolate sorbet and a dusting of Oreo powder. It doesn’t get much chocolatier than this! 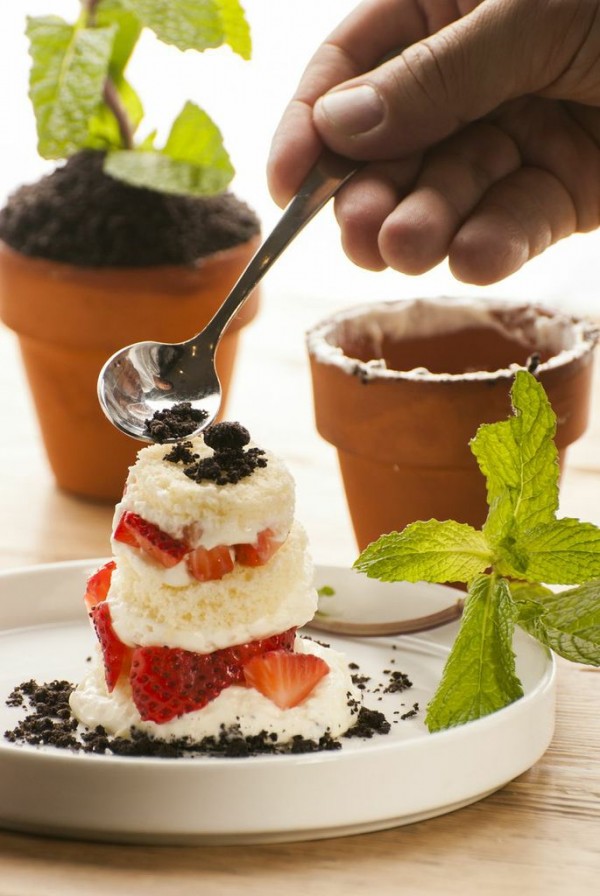 The Harvest – At Spot Dessert Bar there are a number of decadent dessert options ranging from a Big Apple-inspired raspberry puree coated soft cheesecake with apple sorbet to a “chocolate terranium” of cacao with a chocolate parfait, cookies and cream and crunchy green tea.  Possibly the best dessert on the menu is “The Harvest,” which at first glance appears to be a potted plant.  In reality, it’s a lightly soaked shortcake with seasonal stone fruit, chocolate cookie crumbs layered into a ceramic flower pot and topped with a sprig of mint.  Chef Ian’s goal with the treat was to use “fun presentations and flavors that used natural wholesome ingredients and methods.”  He imagined what was in season at the local farmer’s market and — voila! — a decadent idea was born.

OddFellows Ice Cream – There aren’t many ice cream shops in the U.S. that can say they offer genuinely homemade ice cream.  At OddFellows Ice Cream Company in Brooklyn they source dairy from New York’s Battenkill Valley Creamery and make their own base, then incorporate high-quality ingredients which are often local and added in innovative ways.  They are best known for their freezing technique, during which they freeze certain ingredients with liquid nitrogen before smashing them to pieces and folding them into the ice cream, like the jelly in their Peanut Butter and Jelly flavor or the chocolate and strawberry in their Neapolitan flavor.  Some of their most interesting ice creams include Chorizo Caramel Swirl, Tobacco Leaf Smoked Chili Huckleberry and Rose Raspberry with Pink Peppercorn.  They also have a rotating menu of artful sundaes created in collaboration with local brands like Mast Brothers Chocolate and Brooklyn Brewery.

Bacon Pecan Bar – At Bo’s Kitchen & Bar Room, a modern New Orleans restaurant in Manhattan’s Flatiron District, guests can savor a taste of Louisiana with Chef Frank Fuschetto’s Bacon Pecan Bar.  The dessert is inspired by key elements of Southern cuisine like bacon, pecans and bourbon, with the key to the treat’s deliciousness being the crispy yet chewy texture.  It offers a buttery shortbread cookie crust filled with fine crumbled bacon inside every bite.  Also stuffed inside is honey, egg yolk, maple syrup, molasses, a hint of cinnamon and heavy cream for body.  It’s served with a heavenly duo of vanilla-bourbon sauce and cardamom ice cream, as well as candied pecans.

Classic Cocktail Cupcakes – At Prohibition Bakery on the Lower East Side, Brooke Siem and Leslie Feinberg turn classic cocktails into cupcakes.  These aren’t just cupcakes that sort of taste like cocktails, but exactly like cocktails, even infusing the same ingredients.  Along with options like Amaretto Sour made with Amaretto liqueur, orange, lemon and egg white and Car Bomb with whiskey, Bailey’s, stout and chocolate, they offer more conceptual cupcakes.  For instance, you can order the Pretzels & Beer featuring pale ale, Nutella, pretzel and white truffle, or the Scotch & Cigar made with molasses, tobacco and Laphroaig scotch.  For teetotalers, a virgin For The Love Of Bacon has bacon, bittersweet chocolate and toffee. To make the cupcakes, they begin with prototypes and test different ingredient ratios until they create the perfect cupcake.

Carrot Cake with Ginger Gelato – At The Fourth in Union Square, those craving wellness-inspired sugar creations can savor Pastry Chef Eugenio Mauro Pompili’s Carrot Cake with Ginger Gelato.  The twist in this dessert is greenmarket carrots, which adds a slight bitterness to the flavor, cuts the sweetness, provides texture and gives a nutritious boost. Ingredients include grated greenmarket carrots that are folded into light cakes before being iced with sinfully sweet mascarpone.  To heighten the dessert experience even further, pecans for crunch, homemade ginger gelato for some spice and a gown of carrot-orange sauce are also part of the experience.

L’éclair – At Langham Place Fifth Avenue’s Measure Lounge, those craving something sweet can savor Chef David Vandenabeele’s L’éclair, which gives the traditional éclair a lighter twist by using croissant dough.  While a typical éclair features chocolate-glazed cake stuffed with pastry cream, Vandenabeele is creative with the fillings, drawing inspiration from classic cocktails and some of his favorite treats.  The menu changes, and some flavors you might find include New York Cheesecake, stuffed with New York Cheese Cake Filling and gowned in whipped cream, fresh raspberries and pistachio; Caramel Popcorn, filled with salted caramel custard and decorated with caramel glaze and salted pop corn; and the Moscow Mule containing lime and ginger-infused custard and adorned with lime glaze and lemon diamonds.

Have you savored an incredible dessert in New York?  If so, share your discovery in the comments below.

This is a guest post by Jessica Festa, a native New Yorker, NYC tour guide and writer.  Jessica is Author and Editor of websites Jessie On a Journey and Epicure & Culture, and a contributor to many publications including Huffington Post, Sherman’s Travel, Gadling, and AOL Travel.