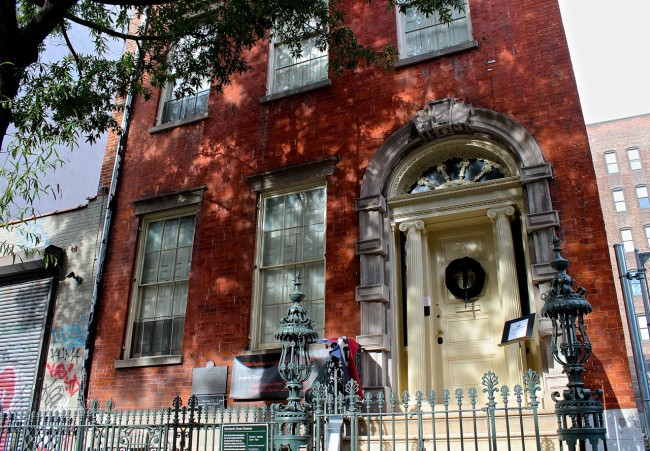 New York is a magnet that has drawn in people since its founding.  In fact, many New Yorkers are so rooted in the city, they refuse to leave…even after death.  With such limited space and layer upon layer of history found at many locales, it’s little wonder that New Yorkers, both alive and deceased, coexist.  We’ve told you about Haunted New York Cemeteries and the city’s most Haunted Theaters – now we introduce a few of New York’s most Haunted Houses.

Hotel Chelsea – “The Chelsea Hotel is a vortex – an artistic tornado of death and destruction and love and broken dreams.”  So stated Sid Vicious, one of the hotel’s long-term residents (some believe very long-term).  “The Chelsea” has long been a celebrity haunt for the likes of Tennessee Williams, Janice Jopllin, Jimi Hendrix, Andy Warhol and Madonna.  It’s also considered one of the most haunted places in the nation, and hotel residents report regular encounters with a variety of ghosts.  One is the renowned poet Dylan Thomas, whose face is often seen around room “206” where he died in 1953.  In 1978 Nancy Spungen was found stabbed to death in the bathroom of room 100.  Her boyfriend, Sid Vicious of the punk band “The Sex Pistols,” was charged with her murder but died of a heroine overdose before standing trial.  Sometimes called the “Punk Rock Romeo and Juliet,” the pair are still familiar figures at the Chelsea, and number 100 is a much-requested room. 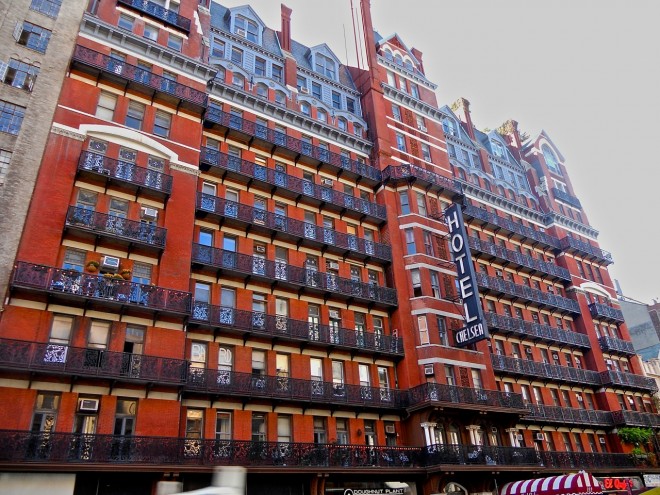 Morris-Jumel Mansion – this 1765 mansion in Hamilton Heights is beautifully preserved and one of the oldest residences in NYC.  It was used by George Washington as his headquarters during the Revolutionary War, and he later dined with his presidential cabinet there. But it’s the feisty madame of the house who holds court at the mansion.  Eliza Jumel, who lived in the house from 1810 to her death in 1865, was quite a colorful character.  She’s rumored to have tricked wealthy Stephen Jumel into marrying her, then allowed him to die of an illness to marry the infamous Aaron Burr.  As America’s Second Lady, she toured Paris introducing herself as the “Vice Queen of the United States.”  Madame Jumel’s first ghostly appearance was in 1964, when she castigated a visiting group of schoolkids to quiet down (sort of a supernatural “Get off my lawn!”).  Soon after, a radio station presented a broadcast of a seance at the mansion, but had to cut the live feed because of Eliza’s foul language.  There are other apparitions as well, including a frenzied servant, a talking grandfather clock and a Hessian soldier known to emerge from paintings on the wall.  By the way, if you tour the mansion, don’t bother to ask about ghostly encounters – the management vehemently denies the hauntings.

83 West 3rd – The spiffy new brick exterior conceals NYU’s Furman Hall has a storied past.  The “Master of Macabre,” Edgar Allen Poe lived there in 1844 and 1845, writing his classic story “The Cask of Amontillado” and at least part of “The Raven” within the house.  After a recent gut renovation, only the house’s original banister remains, where law students have encountered Poe’s ghost climbing the stairs.  A few blocks east at 47 Bond Street, Poe is believed to have lived on the second floor and presumably enjoyed a drink (or two) in the first floor saloon. The staff of Il Buco Restaurant, located on the same site, claim he still helps himself to the stock in their wine cellar. Thoroughly-sealed bottles are sometimes found half empty. 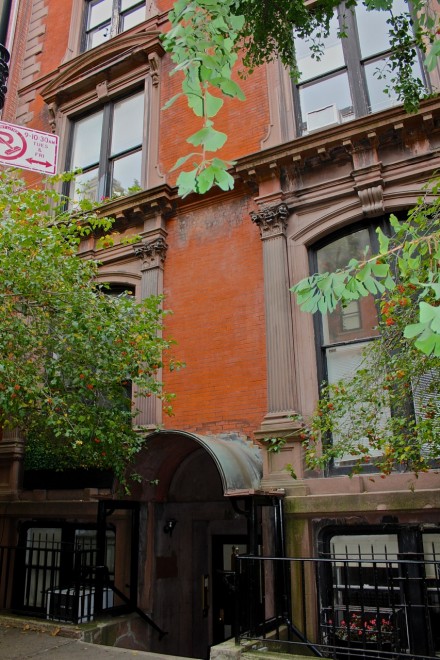 The House of Death – This lovely townhouse at 14 West 10th Street is reportedly home to twenty-two ghosts.  Mark Twain lived there from 1900 to 1901 and claimed he experienced supernatural encounters. Now Twain’s specter, clad in his signature white suit, has been seen ascending the staircase.  Paranormal investigators have sensed the presence of a lady in white, a young child, and a gray cat.  “The “House of Death” has been the site of several gruesome incidents, including a murder-suicide and in 1987 the beating death of Lisa Steinberg at the hands of her adopted father, prominent lawyer Joel Steinberg.

Merchant House – this spooky 1832 townhouse has been perfectly preserved, both inside and out, and is filled with genuine furnishings and belongings of its former residents. The demand for slavish preservation came from spinster Gertrude Treadwell, who was born in the house in 1840 and seldom left it until her death in 1933. The spirits of the Treadwell family and their servants still make it their home and sightings of them gliding or walking are fairly common. Gertrude’s icy-blue veins and gaunt face have been seen, and passersby on East 4th Street have heard eery piano music from within the darkened house.  The Merchant House Museum hosts “Spirited October Events,” including Candlelight Ghost tours and an 1865 Funeral Reenactment and Graveyard Procession. 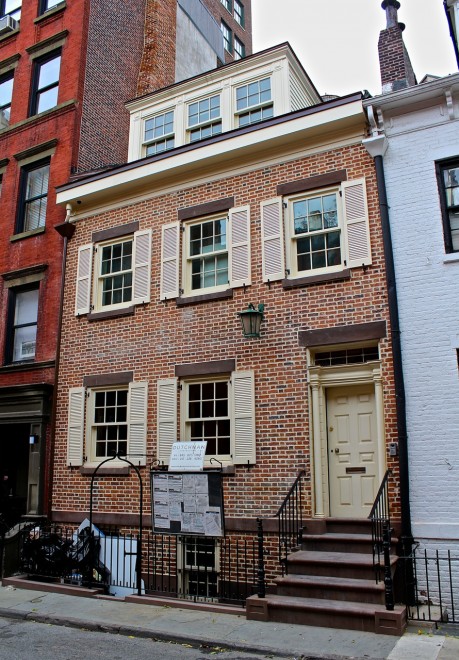 12 Gay Street – Gay Street is a crooked Greenwich Village byway lined with 19th century homes.  It was once site of a Dutch-era morgue and later home to stables and servants of the affluent residents of Washington Square.  Number 12 is four-story brick townhouse with a colorful past.  During the roaring 20’s, NYC’s mischievous mayor Jimmy Walker bought the house to keep his chorine mistress Betty Compton, and the basement was the notorious speakeasy, the Pirate’s Den.  Sounds of raucous parties have been heard from within and several ghosts have been seen appearing and vanishing.  The regular apparitions include a foreign diplomat nervously pacing, pretty young woman dressed in 1930s garb, and a girl from the 1960s in front of the door.  The best known spirit is the Gay Street Phantom, an old man decked out in an opera cape and top hat.  Many spooky stories come from former resident Frank Paris, who invented the Howdy Doody puppet on the premises.

57 West 57 – in a posh midtown penthouse, Carlton Alsop claimed he was living with a diseased and dysfunctional couple.  In 1922, former showgirl Edna Crawford and her lover Charles Brazelle were acquitted of murdering her wealthy husband (inventor of the spark plug), and used their fortune to buy the midtown penthouse.  Things quickly soured between them – Brazelle kept Edna a prisoner in the swank apartment, and eventually beat her to death before her bodyguards threw him out the window.  After sitting vacant for decades, Alsop moved into the penthouse where he heard the couple’s violent arguments, and his guests reported seeing horrific, unexplainable sights. Eventually his wife left him, his dogs had nervous breakdowns, and things got so bad for Alsop that he had himself committed before abandoning the penthouse forever. 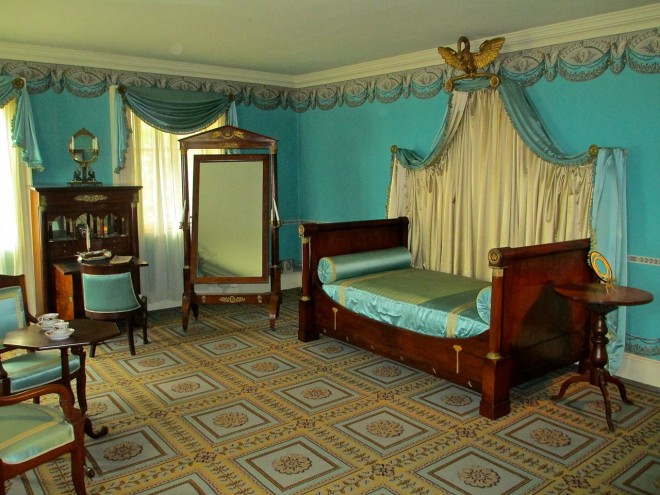 Have you encountered one of NYC’s ethereal residents? If so, we’d love to hear your ghost story in the comments below.