By Walks of New York on November 7, 2011 in Landmarks, NYC Sights 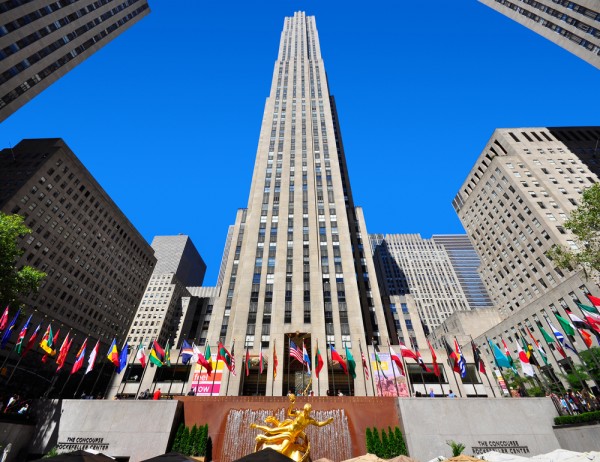 Rockefeller Center is the symbol of midtown Manhattan and easily one of the best attractions in New York. A complex of 19 buildings and plazas, located between Fifth and Seventh Avenues and 48th and 51st  Streets, Rockefeller Center was built to be a “city within a city.”

And it is! It’s home to corporate headquarters, offices, television studios, theaters, shops, and restaurants. The Art Deco design, both architectural and decorative, of the original buildings is some of the world’s finest. 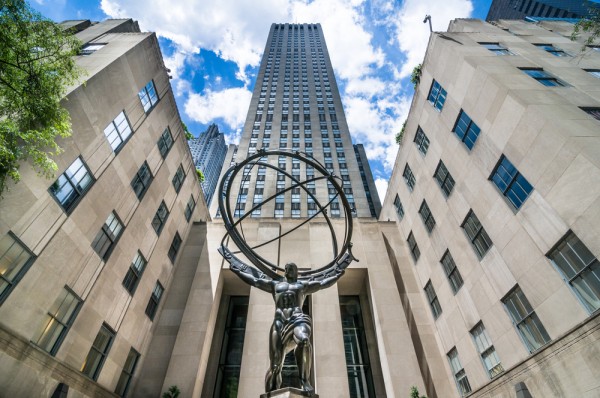 Rockefeller Center, with the statue of Atlas supporting a globe

John D Rockefeller Jr. leased the site for Rockefeller Center from Columbia University in 1928, and soon began demolition of the speakeasies, rooming houses, and brothels that occupied the area. He directed his planners to design a commercial center “as beautiful as possible consistent with maximum wealth.”

Like many of the other best attractions in New York, it was a risky venture. The Rockefeller Center is largest private building project of modern times, undertaken at the height of the Great Depression. Construction of the original 14 buildings began in 1930 and was completed in 1939.

Between the 1950s and 1970s, four International-style office towers were built on the west side of the Avenue of the Americas (Sixth Ave.), expanding the Center’s boundaries. The latest addition to Rockefeller Center was the Lehman Brothers Building on Seventh Avenue, which opened in 2001.

What to see in Rockefeller Center 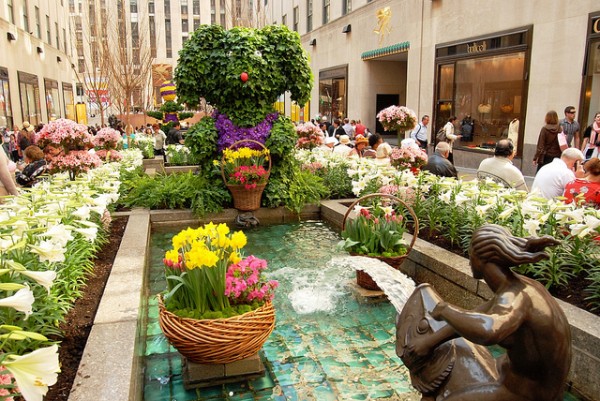 Standing on the west side of Fifth Avenue, between 49th and 50th Streets, enter the famous promenade known as The Channel Gardens (flanked by The English Building and La Maison Francaise, hence the name). Down the center of this 200-foot walkway are granite pools and fountains, which are surrounded by seasonal floral displays. By far, the most famous display is the annual Christmas Angels.  Proceed west down “the channel.”

This sunken plaza before you is home to the ice skating rink in winter, and the Summer Garden Restaurant in warm weather. Behind the plaza is the gilded bronze statue of Prometheus by Paul Manship.

The steps on either side of the sunken plaza lead up to the private street named Rockefeller Plaza. This is where the towering Rockefeller Center Christmas Tree stands every year! 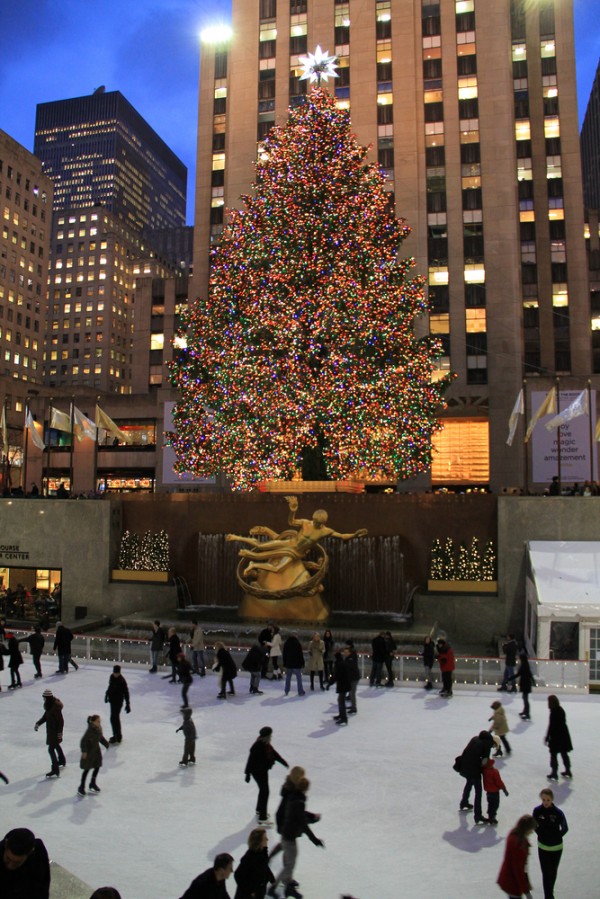 To your left (facing west) are the Today Show Studios, from which the program is broadcast live every morning.

Directly ahead is 30 Rockefeller Plaza (crowned by a relief of Wisdom by artist Lee Lawrie), the entrance to the GE Building. This 70-story skyscraper dominates the Center, and is home to NBC studios (WNBC News, Rock Center, MSNBC, Saturday Night Live, and Late Night with Jimmy Fallon are all taped here). Guided tours of the studios are available.

Atop the building is Top of the Rock Observatory (with arguably the best view of New York!). 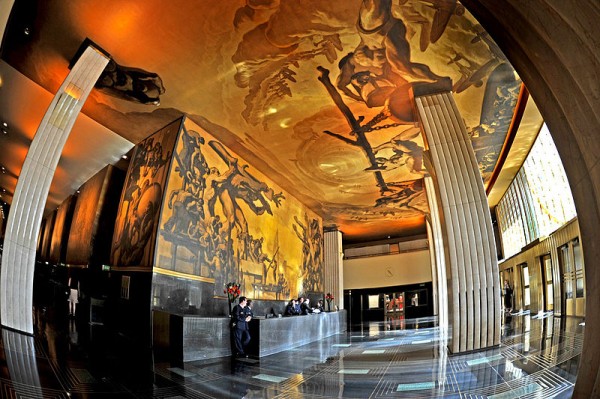 Just inside the entrance is a large mural by Jose Maria Sert called American Progress, and the ceiling (also by Sert) is Time. (It’s said the giants atop the pillars always face you, no matter where you move through the lobby).

Progressing through the building, you’ll find steps leading down to the Concourse, more than two miles of underground passageways that connect all 19 buildings, as well as the New York subway. The Concourse is lined with shops and restaurants, and enables workers to avoid inclement weather.

Over the building’s Sixth Avenue entrance is a mosaic entitled Intelligence Awakening Mankind by Barry Faulkner. The mosaic is made of about 1 million pieces of colored glass.

Across 50th Street lies Radio City Music Hall, one of the world’s largest theaters (6,200 seats!), and an Art Deco masterpiece. The auditorium, lobby spaces and restrooms are extraordinarily beautiful and well worth seeing. The theater is open for performances (concerts and the annual Christmas Show), private special events, and guided tours. Don’t forget that a performance featuring The Rockettes is one of the best attractions in New York!

Walk back along 50th Street to Fifth Avenue. At Rockefeller Plaza, look to your right for the stainless steel panel titled News by Isamu Noguchi on the Associates Press Building.

Reaching Fifth Avenue, you’ll see the magnificent St Patrick’s Cathedral.  Take a right on the corner and walk to the entrance of the International Building. Outside, you’ll see the famous bronze statue of Atlas supporting a globe studded with signs of the zodiac (Lee Lawrie, 1937).

Inside the impressive lobby are two central escalators—much like 19th century grand staircases. For years, the building was home to steamship lines, travel agencies, and foreign consulates, all benefiting from the U.S. Passport Office on second floor. The ceiling is covered in copper leaf and the north and south walls by the gleaming sculpture Light and Movement by Michio Ihara.

Rockefeller Center’s website has lots of great information, including detailed maps. There’s also a link for tickets to the Rock Center guided tours.

Urban Renewal: Old Tiffany Gets a Makeover
A Year in New York