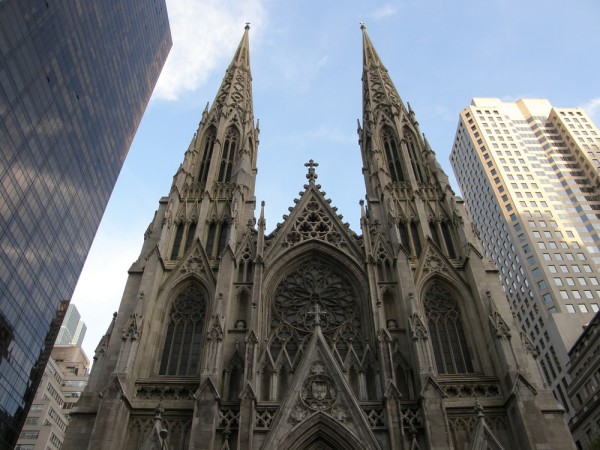 New York’s Saint Patrick’s Cathedral is a magnificent symbol of faith in the heart of the city.  Seat of New York’s Catholic archdiocese, it is the largest Gothic cathedral in the nation, covering an entire city block.  Every year, over five and a half million people are drawn to St. Patrick’s for worship, spiritual consolation, or to simply marvel at its remarkable beauty.

The cornerstone for St. Patrick’s was laid in 1858 in an area that was primarily farmland.  Built to accommodate the city’s growing community of Catholic immigrants, it was considered a “folly” for its setting outside the populous city.  Despite delays caused by the Civil War, the Gothic Revival structure was consecrated in 1879.  A newspaper hailed it as “the noblest temple ever raised in any land to the memory of Saint Patrick, and as the glory of Catholic America.”  The cathedral was declared a National Historic Landmark in 1976. 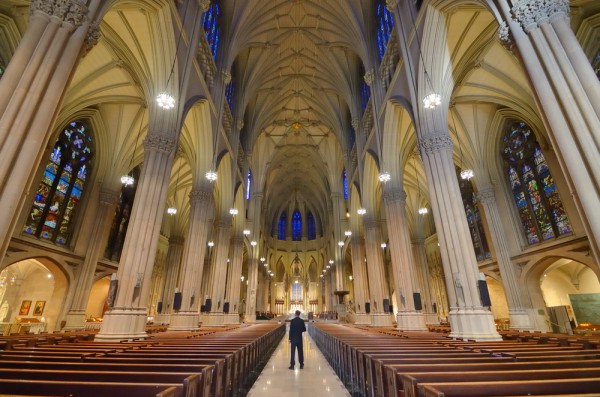 The main entrance of St. Patrick’s Cathedral is located on Fifth Avenue between 50th and 51st Streets.

Open daily 6:30am – 8:45pm.  Access to the cathedral may be restricted during certain ceremonies or holidays.

Be advised there is a security bag check at the main entrance and large bags or luggage may be turned away.

Several masses are celebrated at St. Patrick’s daily.  Check the cathedral’s calendar for a complete schedule. If you’re in New York for a few days, consider taking one of our guided walking tours of New York.

The flamboyant Gothic exterior includes two spires that rise 330 feet (100 meters) above the street. The cathedral’s massive bronze doors (inspired by the doors of the cathedral of Florence) include sculptures of Saints Patrick, Joseph, Francis Cabrini, Isaac Jogues, Kateri Tekakwitha, and Elizabeth Anne Seton.  Each door weights 9,200 pounds and is so well balanced a single hand can open it.

Inside the cathedral, slender marble pillars support the cross-ribbed vaults that rise 110ft. above the nave.  At its center is the cathedral sanctuary, holding the main altar covered by a 57-foot bronze canopy called a Baldacchino. 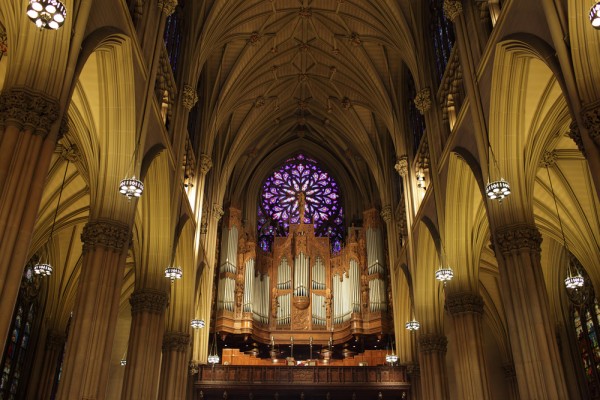 Look above the main doors to see the Rose Window, one of 70 stained-glass windows in the cathedral.  The colorful work is 26 feet in size and features numerous angels. Below the window is one of the cathedral’s two organs containing 7,855 pipes ranging in length from thirty-two feet to one-half inch.

To tour the cathedral’s chapels, follow the side aisles.  Beginning in the far left aisle you’ll encounter…

Seven sculpted relief panels lining the cathedral’s north transept (the arms of the cathedral’s cross-shaped floor plan) depicting the Stations of the Cross.  These sculptures were first displayed at the 1893 Chicago World’s Fair, where they won several prizes for artistry.  The remaining seven “station” reliefs are found on the south transept. 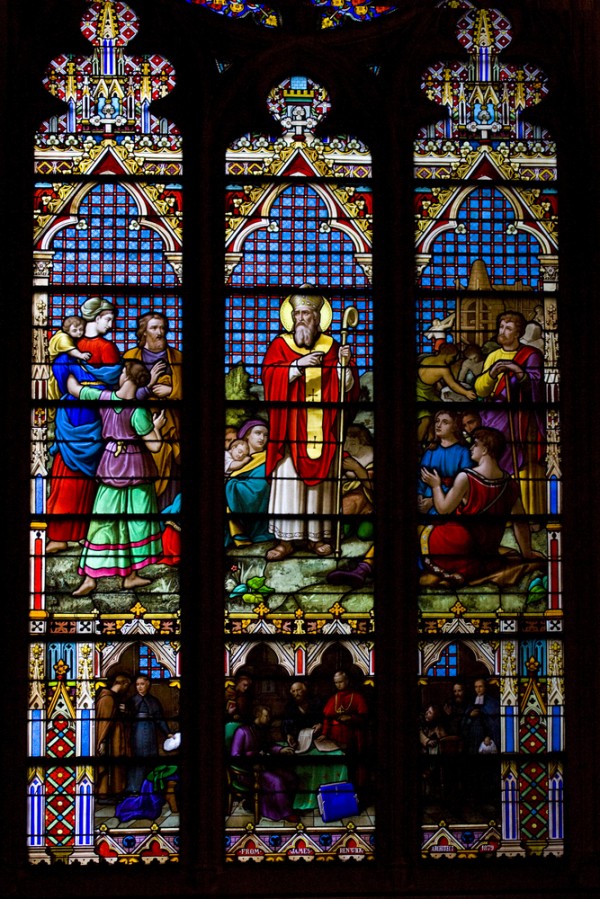 Near the steps to the sanctuary is a statue of Saint Patrick,  the patron saint of Ireland to whom the cathedral is dedicated.  He is carrying a book of gospels and a shamrock in his left hand. Patrick used the three leaves of the shamrock to illustrate the concept of the Holy Trinity, and it became his symbol.

Along the aisle behind the sanctuary is the Altar of Saints Michael (right) & Louis (left). It was built by the Tiffany Company and was a gift of the Bouvier family (as in Jacqueline Bouvier Kennedy).

At the center of the Ambulatory (behind the sanctuary) is the Lady Chapel, a sacred space reserved for prayer and contemplation (no talking or photography allowed).  Constructed in 1901, this chapel was not part of original design.  Above the altar is the statue of Our Lady of New York.  The chapel is enveloped by large stained-glass windows which have been described as “flaming jewels of light.”

Located underneath the high altar is the crypt in which notable Catholic figures are entombed.  They include the eight archbishops who have served the Archdiocese of New York and Pierre Toussaint.

Look for the moving Pietà sculpture by William Partridge, which is three times larger than Michaelangelo’s famed Pieta.  Look up to see four red hats with long tassels hanging from ceiling.  Known as galeros, these hats are given to cardinals to acknowledge their exalted position.  After their death, the hats were traditionally suspended from a  ceiling.

In the south transept is the Altar of Our Lady of Guadalupe.  In 1991 the Archbishop of Mexico City gave the painting to the cathedral as a gift, and it is particularly popular with Latino worshippers.  On December 12th, the Lady’s feast day, the chapel is filled with flowers in her honor. 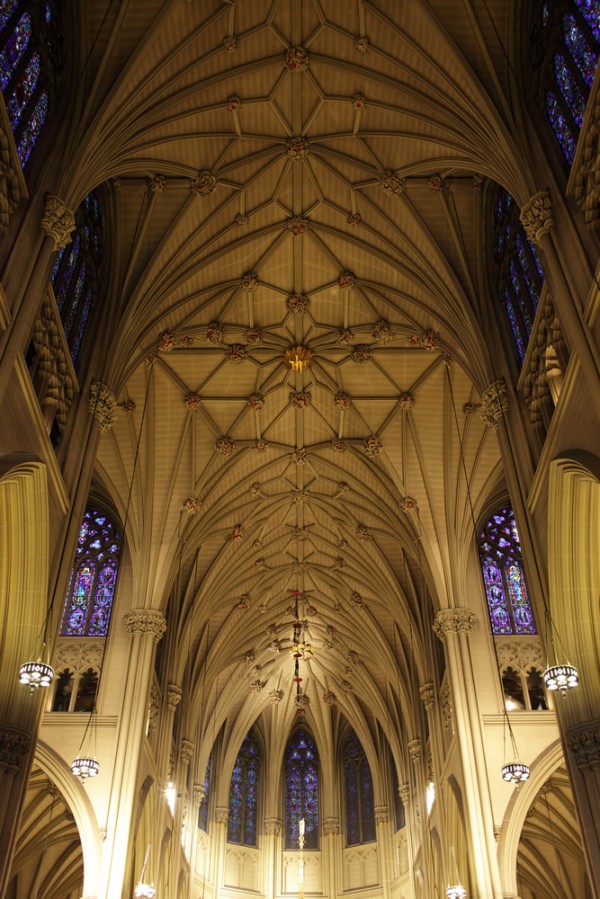 Above the south transept is the stained glass Founders’ Window.  It depicts St. Patrick preaching to peasants while another panel shows cathedral architect James Renwick Jr. presenting his plan to Archbishop Hughes, the man behind its creation.

Music plays a big role in the cathedral and can be heard in Masses with Music, as well as choral and chamber concerts.  Check the Cathedral Concert Series page for details.

If you can not make it to a cathedral service, you can tune in to a live broadcast of mass every Sunday at 10:15 AM.

St. Patrick’s Cathedral is currently undergoing a massive $175 million renovation.  The work includes cleaning of the interior and exterior, restoration of the organ, pews, stained glass windows, and repairs to stonework and plasterwork.  The work is extensive and may effect your visit with scaffolding, closed areas, and construction noise.

St. Patrick’s is the focal point of three of NYC’s most cherished holiday traditions – midnight mass on Christmas Eve, the St. Patrick’s Day Parade (the world’s largest), and the Easter Parade.

Have you been to St. Patrick’s Cathedral?  What did you find most memorable? Tell us in the comments below.