Located in the heart of New York’s glitzy theater district, Sardi’s restaurant is a must for Broadway fans in the city. This classical eatery, located smack dab on West 44th Street, not only serves up delicious eats – it’s also the best place to absorb New York’s rich cultural legacy of Broadway. Opened in 1927 by the Sardi family, Sardi’s restaurant has been delivering exceptional service to theater producers, stars and fans for generations! 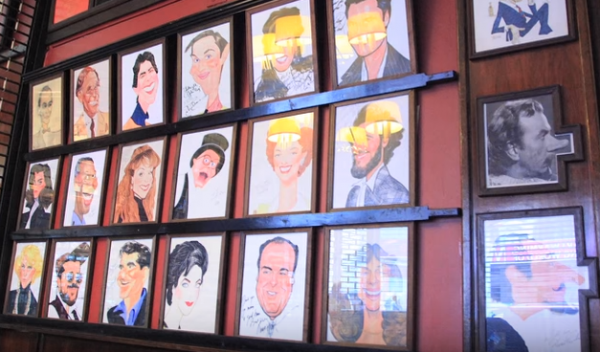 Don’t be fooled by reports that Sardi’s restaurant is overhyped and a bit cheesy. The restaurant’s devotion to the celebrities past and present is all part of its charm! Each wall is adorned with caricatures of everyone from Barry Manilow and Tom Hanks to Helen Mirren and Bradley Cooper, some of which are barely recognisable. The whole family can have a giggle trying to figure out who’s who over a mouth-watering plate of cannelloni au gratin or steak tartare. The first 700 caricatures were created by Russian refugee Alex Gard until his death in 1948. He was succeeded by John Mackey, Don Bevan and Richard Baratz, who continues to be Sardi’s caricaturist today.

It’s easy to see why the establishment is such a hit with visitors to the city – soaking up the buzzing atmosphere before your Broadway show is an experience in itself. Sardi’s restaurant has also long been the chosen watering hole of the illuminati of the stage. The restaurant was a well-known pre and post-theater hangout in the past, with many opening night parties held there. It was also the birthplace of the Tony Awards, envisioned by director Brock Pemberton while he was eating lunch inside one day. In fact, Vincent Sardi Sr received a special Tony Award in 1947 for “providing a transient home and comfort station for theater folk”.

Sardi’s Restaurant on the big screen

Want to catch a glimpse of this world-famous restaurant for yourself? If you can’t make it to New York then check out these films which feature scenes shot in Sardi’s restaurant – ‘Forever Female’ starring Ginger Rogers, ‘The Country Girl’ with Grace Kelly and Doris Day’s ‘Please Don’t Eat the Daisies’. Kermit the Frog even ate in the restaurant in ‘The Muppets Take Manhattan’. More recently, Sardi’s restaurant appeared in episodes of ‘Seinfeld’, ‘Mad Men’ and ‘Glee’, highlighting its ongoing popularity.

We can’t sing Sardi’s praises enough – the restaurant’s unique interiors, friendly staff and tasty treats are sure to put a smile on even the most seasoned theater goer’s face.

Want to learn more about the history of Broadway? Book your place on our special Disney on Broadway tour today and explore Times Square with an experienced guide.