Who Is Shirley Chisholm? 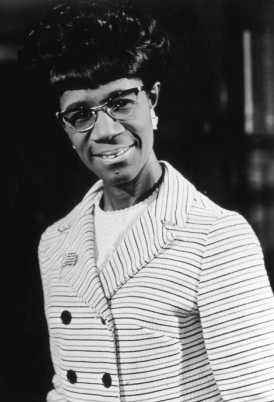 Who is Shirley Chisholm?

Well, she’s a woman you should know about! “Just wait, there may be some fireworks,” she predicted… when she was elected the first black woman to serve in the United States Congress. Shirley Chisholm broke barriers of race and gender—all while being driven, seemingly fearless, and outspoken (with a sly sense of humor, to boot!).

Shirley Chisholm was born in Bedford-Stuyvesant, Brooklyn on November 30, 1924 to West Indian immigrant parents. Her father worked in a factory and her mother was a seamstress and domestic worker. Chisholm graduated from Brooklyn College with honors before earning a master’s degree at Columbia University.

She began her career as a director of day care centers, and later served as an educational consultant with NYC’s Bureau of Child Welfare. In 1964, Chisholm became the first black woman elected to the New York State Assembly, where she fought for programs to assist domestic workers and underprivileged students.

In 1968, Chisholm was elected to Congress, representing Brooklyn’s 12th Congressional District, which included her own neighborhood of Bedford-Stuyvesant. Her constituents were primarily poor and people of color. “I am an historical person at this point,” said Chisholm. “I am the people’s politician.”

Refusing to be dismissed or disrespected by the congressional establishment, Chisholm took Congress on from the start. When she was relegated to the Agriculture Committee (which was divorced from the needs of her urban constituency), she demanded reassignment. She was soon reassigned to the Veterans Affairs Committee, and eventually to the Education and Labor Committees.

Continuing to buck the system, Chisholm fought hard to help and protect women, children and minorities. Frustrated by the politics, she complained, “The Congress that is supposed to represent the voters does not respond to their needs. I believe the chief reason for this is that it is ruled by a small group of old men.”

In 1972, Chisholm took a truly unprecedented step: she announced her candidacy for President of the United States.  To ambivalent members of the Congressional Black Caucus (which she helped found), she said, “If you can’t support me, or you can’t endorse me, get out of my way.” 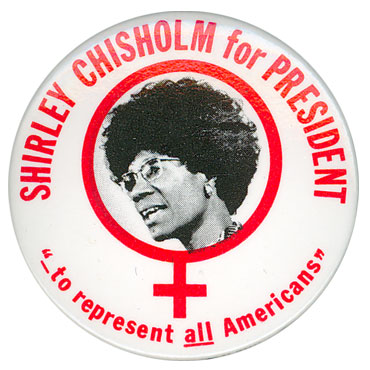 Shirley Chisholm’s campaign button when she ran for president

Chisholm’s campaign slogan was “Unbossed and unbought.” But it was an uphill battle.  She took her role in congress seriously, so had limited time to canvass. With only $300,000 in donations, her campaign was genuinely grassroots, staffed by volunteers instead of political professionals.

She was often ignored by the press, and had to obtain a federal court order under the equal time provisions of the FCC to be included in a televised debate.

There were even death threats against Chisholm. Three attempts were made on her life, including a knife-wielding man who intended to stab her in the back. But she refused to quit, saying, “My candidacy itself can change the face and future of American politics.” She also told a group of black delegates, “I’m the only one in here who has the balls to work for black people.”

After six months of campaigning in 11 primaries, Chisholm had 28 delegates committed to vote for her at the Democratic Convention. When she withdrew from the race, she had secured 151 electoral votes. “I ran for the presidency, despite hopeless odds, to demonstrate the sheer will and refusal to accept the status quo… to give a voice to the people the major candidates were ignoring. What I hope most is that now there will be others who will feel themselves as capable of running for high political office as any wealthy, good-looking white male.”

After serving seven terms in the House of Representatives, Chisholm left Washington in 1982, saying that “moderate and liberal” lawmakers were “running for cover from the new right.” 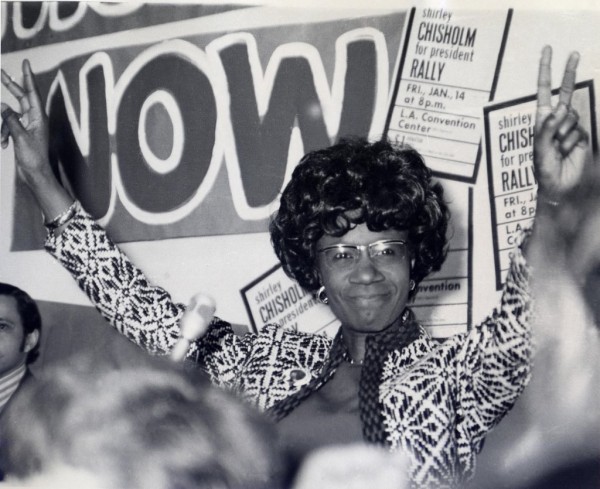 She taught at Mount Holyoke College in Massachusetts for four years and became a sought-after speaker.

Among Chisholm’s memorable quotes are:

Chisholm retired to Florida, where she died on January 1, 2005.

Of her legacy, she said, “I’d like them to say that Shirley Chisholm had guts. That’s how I’d like to be remembered.”

Mr. Lincoln Goes to NYC
Everything You Need to Know To Visit The Metropolitan Museum of Art