How to See Sporting Events in NYC

Nothing brings a community together quite like sports—whether you’re a fan of baseball, basketball, football, or tennis, catching a sporting event in NYC is a great way to spend an afternoon or evening in the city. But with so many iconic sports teams in New York, it’s hard to decide who to see when you come to visit. That’s why we’ve put together this guide for how to catch all of your favorite sporting events in NYC on your next visit.

Insider Tip: Paying a high price for food and drinks at all of these venues is just part of the experience—because of strict checkpoints and carry-in policies at each venue, it’s difficult to bring your own snacks to a game. Be sure to plan ahead and either eat before the game or be aware that you may pay a little more than usual for your meal. Either way, don’t let concession prices ruin your day.

One of the most recognizable sports team logos in world belongs to the New York Yankees.

New York City is home to two Major League Baseball teams, both of which have stadiums that are just a quick subway ride from Manhattan. The Yankees, NYC’s American League team, have long boasted some of the sport’s biggest namesy—Babe Ruth, Joe DiMaggio, Lou Gehrig, and more recent players like Derek Jeter, Mariano Rivera and Alex Rodriguez. In 2009, the Yankees opened the new, $1.5 billion Yankee Stadium near the original stadium in the Bronx, with a capacity of 52,000 seats.

Getting to the stadium is easy—you can take the 4, B, or D subway lines to the 161st Street/ Yankee Stadium stop. There’s also a stop for Yankee Stadium off the Metro-North, but we don’t recommend that unless you are already traveling from north of the city.

Once you arrive, be prepared to wait in line – anyone with a bag will need to show it to a security officer before entering – but once you’re inside, you’re free to roam around. This is standard for all sports venues in the city. The stadium offers all of your classic meal options including hot dogs, hamburgers, beer and wine, pizza, and ice cream. There is also a Johnny Rockets and sushi bar. The stadium website offers a great A to Z guide on every question you could possibly ask before the game.

Citi Field in the Queens neighborhood of Flushing is home to 2015 National League Champions, the Mets. Because they lack the decorated history and cultural cachet of the Yankees, the Mets are arguably more proactive about finding new ways to bring in spectators. They are known for including fun events during and after games like giveaways, free t-shirt Fridays, post-game fireworks, concerts, and base runs for kids. The easiest way to get to Citi Field is by train—take the 7 all the way out to the Mets-Willets Point stop and follow the signs to the stadium. And don’t forget to snap a selfie next to the Apple or with Mr. Met himself.

Insider Tip: Twice a year, the Yankees and Mets play each other in the ‘Subway Series’ (because you can get from one stadium to the other by subway). It’s best to book way ahead for these games, but they are extra fun because they are bursting with proud New Yorkers! 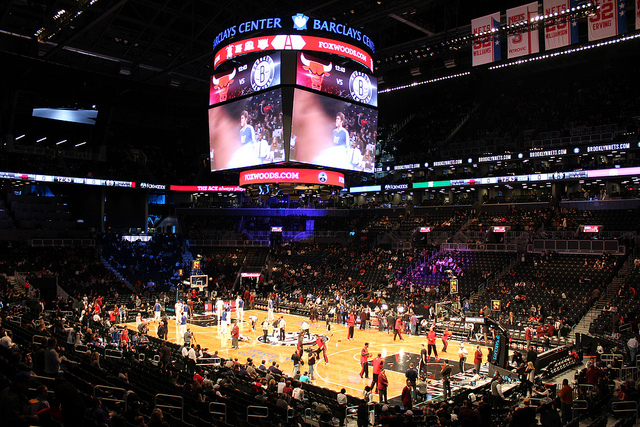 The Nets have found a new home and Barclays Center and Brooklyn loves them. | Photo by Shinya Suzuki

NYC’s basketball diary is a tale of two boroughs: Manhattan and Brooklyn. In Manhattan, the New York Knicks call Madison Square Garden, home—you can’t miss the venue while traveling through Midtown with its flashing billboards and bright lights. Over in Brooklyn, the new, Jay Z-backed Barclay’s Center is now the home of the Brooklyn Nets (formerly known as the New Jersey Nets). Unlike the baseball or football stadiums in the city, both basketball arenas are situated in busy neighborhood centers, giving you plenty of options for pre or post-game dinner and drinks.

For visitors, a knicks game is probably the more iconic of the two sporting events in NYC. To get to Madison Square Garden, you can take the 1,2,3 or A, C, E subway lines. The venue is also attached to Penn Station, which services the New Jersey and Long Island Railroads for those coming in from out of town. However, because of the arena’s central location, we recommend walking from your hotel—if it’s close enough. The venue is a short distance from Times Square, Bryant Park, and Herald Square, and you’ll have plenty to see and experience on your way over.

If you are catching a game at the Barclay’s Center, you can take almost any subway line into Brooklyn (this area is a major intersection for subway lines). Specifically, the B, Q, R, G, D, M, N, R, A, C, 2, 3, 4, and 5 all stop at or near the arena, so you’ll have an easy way to get back to your hotel in the city, even late at night.

Did you know? Madison Square Garden is the oldest and most active sporting facility in the NYC area. 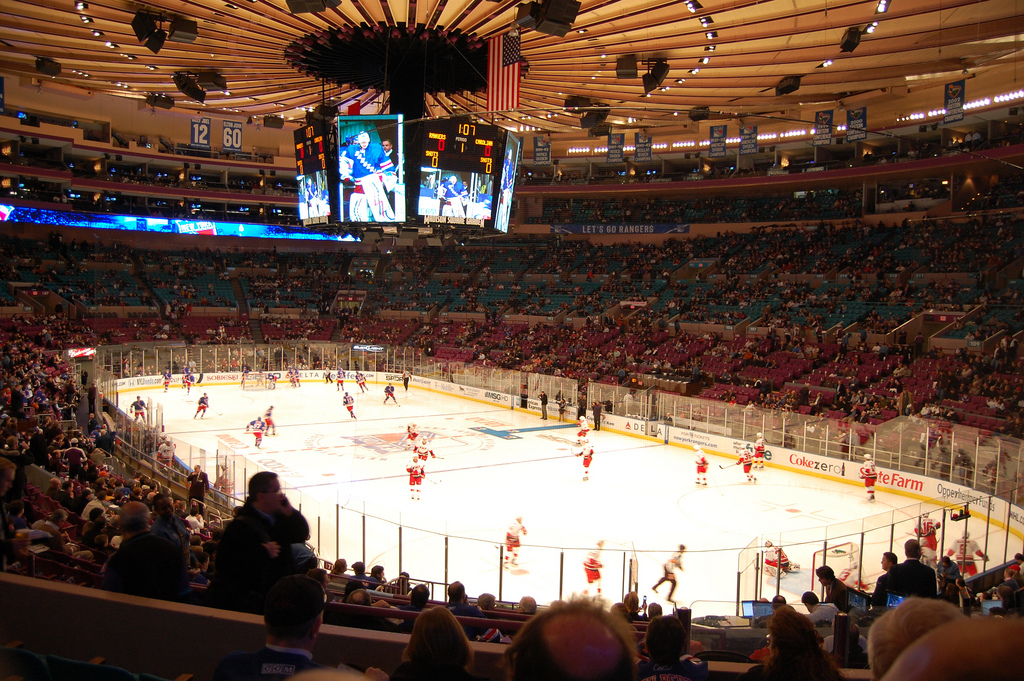 Aside from Baseball, hockey has historically been one of the most important sporting events in New York. The Metropolitan area has three National Hockey League teams, however, only two are easily accessible to people visiting New York.

The New York Rangers are still the most popular team, and like the Knicks, play their home games at Madison Square Garden. If you’re not a fan of the Rangers, the New York Islanders are just a short subway ride over to the Barclay’s Center in Brooklyn (they used to play in Nassau county on Long Island before the Barclay’s Center opened. Luckily, the Barclay’s Center is closer to many of NYC’s major neighborhoods, making it easier for fans to catch a game.). Finally, if it’s the popular New Jersey Devils you’re looking to see, you will have to trek out to the Prudential Center in Newark, NJ. While the Devils are often considered an essentially New York hockey team, they are a major rival of NYC’s Rangers. To get to the arena by public transportation, take the 24/7 PATH train from the World Trade Center stop to Newark-Penn Station. You can also take the New Jersey Transit, which offers direct service to Newark from Penn Station.

Did you know? The New York Rangers were the first American team to bring home the Stanley Cup. 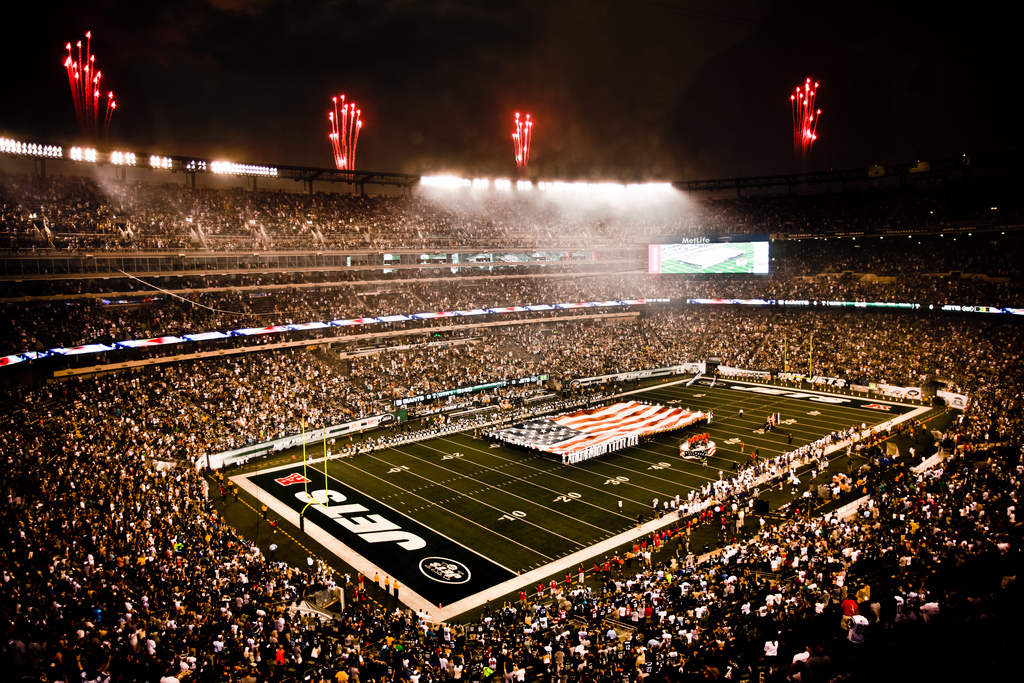 There are 32 teams in the NFL but only 31 stadiums because the New York Jets and the New York Giants share the mighty MetLife stadium. This means that whether you are a fan of the Jets or Giants, (or, God-forbid one of those other teams outside of the tri-county area) there’s always a chance to see a weekend game during the latter third of the year. A short train ride from Manhattan by New Jersey railroad, you’ll get the most out of your visit by taking public transportation. However, if you prefer to drive, Met Life has plenty of parking available. Once in the stadium, you can enjoy all the usual amenities plus a top-notch shop for team merchandise – be prepared to spend a pretty penny, though.

Insider Tip: Outside of the stadium, Dunkin Donuts offers a great “quarterback deal”: if a New York team wins, any cup of coffee costs only 25 cents the next morning.

Every year in late August and early September, New York hosts the US Open – one of the 4 Grand Slam tournaments in the world – at Flushing Meadows in Queens. The tournament hosts the best players in the world at any given time, with the marquee matches played in Arthur Ashe stadium, while lesser-billed matches are contested on the outlying courts. Buying a ticket to Arthur Ashe means you can also watch most of the matches taking place on the surrounding courts. Tickets to the tournament get progressively harder to come by and more expensive the closer your get to the finals, but snagging tickets to an early match day is relatively easy—and it’s always a fun time at the events! Flushing Meadows is located at the same Mets-Willets Point stop in Queens off the 7 train as Citi Field. To get there just go in the opposite direction of Citi Field when you step off the train (the two venues are neighbors).

Insider Tip: Remnants of the 1964 World’s Fair still reside in Flushing Meadows Corona Park, right near Flushing Meadows. During a break between matches at the US Open, take a walk through the park and relive the glory of the fair. 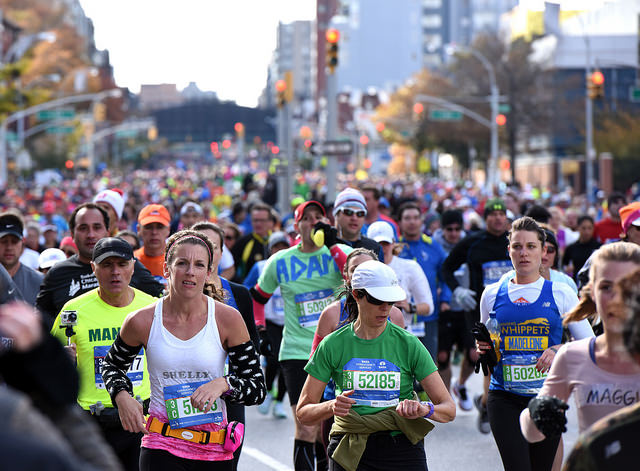 The New York Marathon shuts down the city for one Sunday every November and it is glorious. | Photo by Steven Pisano

If you’re an avid runner, NYC is a mecca for running routes—whether you sign up for a race or want to go for a jog before your Met tour, the city has plenty of options. But when it comes to watching a race, there is nothing like seeing the thousands of runners each year in the New York Marathon, held in November. The route gets pretty crowded with spectators but there are a few spots that guarantee a great view of the runners. Just over the Queensboro Bridge in Long Island City, you can catch the runners right before they cross the bridge, or, wait at the other side, in Manhattan, as they turn up Fifth Avenue on the Upper East Side. If you prefer watching from the shade, the final leg passes through Central Park, offering you a great setting for photos.

Did you know? The New York City Marathon passes through all five boroughs, starting on Staten Island and passing through Brooklyn, Queens, Manhattan, and the Bronx, before looping through Central Park at the end.

Getting tickets to most regular season games is easy—because each team in New York hosts numerous games throughout the season, you can pick and choose the days you want to catch a game through the team’s website. Bear in mind that Basketball, Baseball, and Hockey have long seasons with many games while Football seasons are relatively short with only 16 games per team, and only 8 of those games played at home. Depending on how a football team is doing, this might mean that tickets are harder to come by as the season progresses.

While it’s technically possible to buy your tickets at the stadium the day of a game, we don’t recommend it. With crowds, scalpers, and the risk of selling out, it can be and often is a logistical nightmare. Play it safe and buy all your tickets for NYC sporting events online and in advance.

If it’s cheap tickets you’re looking for, there are ways around the face value prices—Stub Hub is a ticket resale website that can offer tickets for affordable prices and/or provide tickets to games that are sold out. If you check the site the day of the game, you may even be able to score a deal! There are plenty of other discount ticket websites that offer deals—Goldstar always has deals for Mets and Yankee games, and Groupon is another website that can offer deals. A little bit of bargain hunting online can help you save a few dollars. 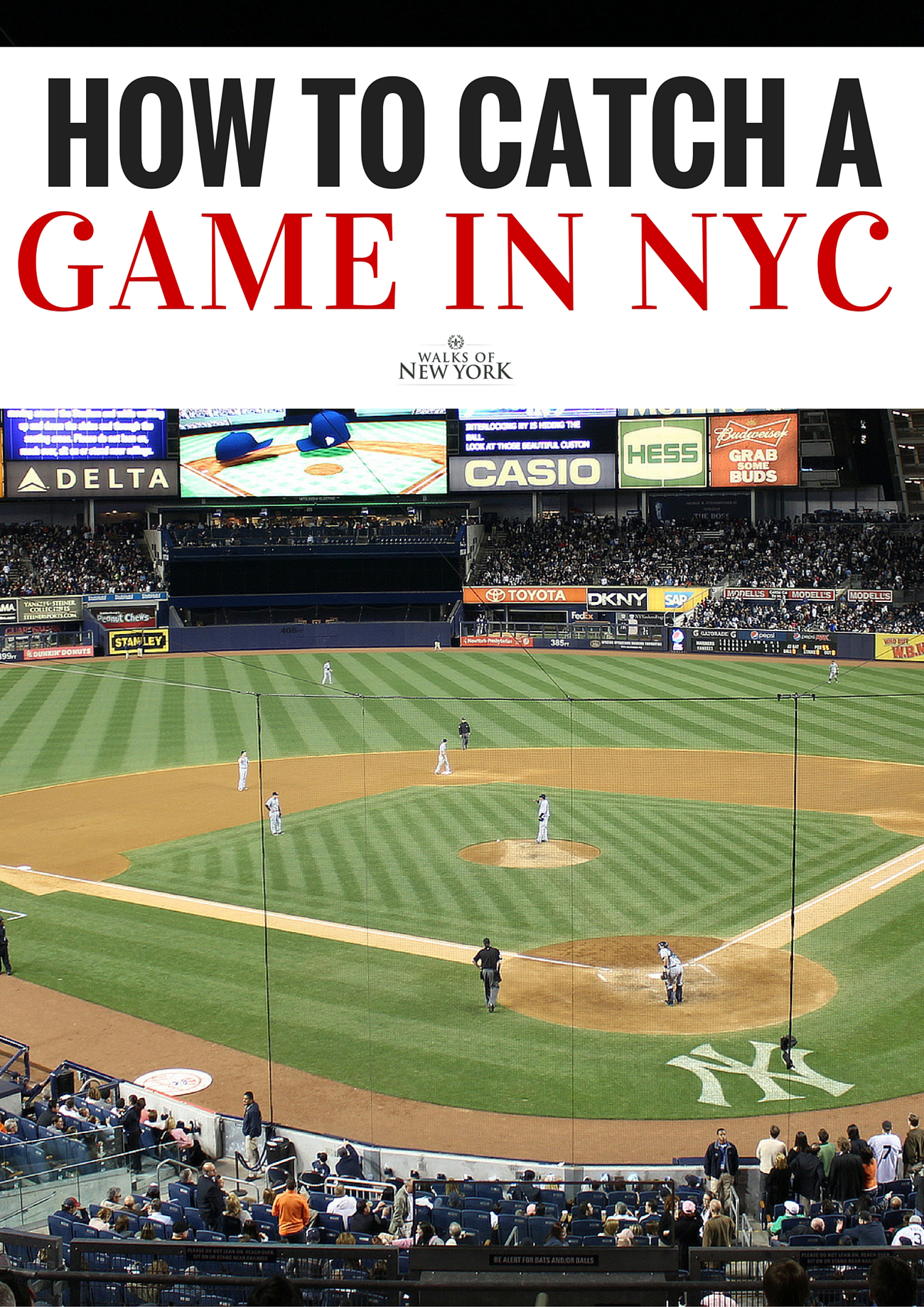