By Walks of New York on February 4, 2015 in Landmarks, NYC Sights 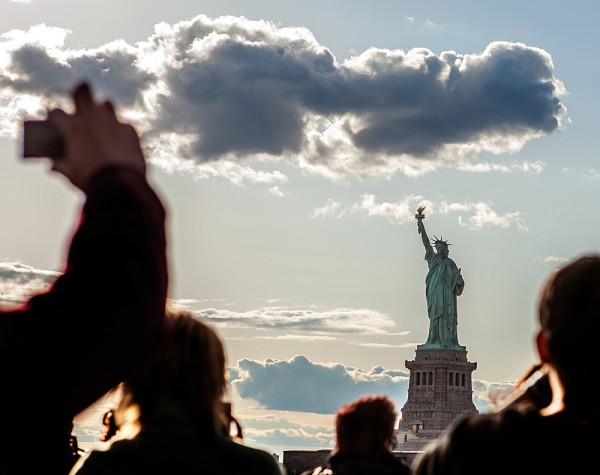 The Statue of Liberty, a symbol of New York 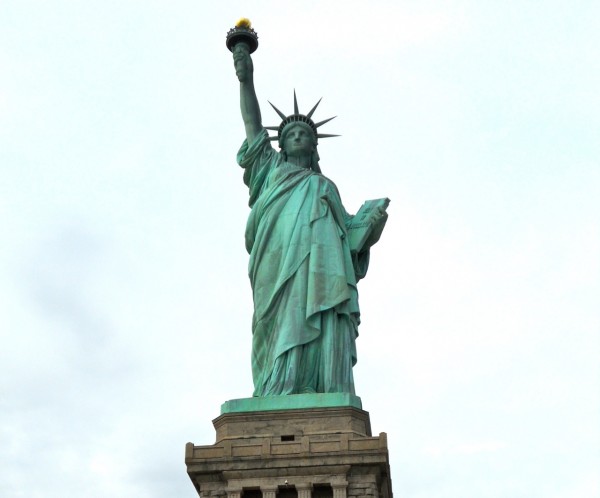 “Liberty Enlightening the World” is the original name of the Statue of Liberty, which was a gift from the people of France to America. Sculptor Frederic Bartholdi designed it, and the iron skeleton was devised by Gustav Eiffel (before his famed Tour Eiffel, aka Eiffel Tower).

Bartholdi designed the statue like a giant, three-dimensional puzzle. Over 300 thin sheets of copper (only 3/32 of an inch or 2.37 mm—about the thickness of two pennies) fit together to form the statue’s “skin.”

The sheets were shaped using the ancient repousse method, in which the metal is hammered and shaped within large wooden and plaster molds. The sheets are bound together in sections by steel straps and joined to a web of steel bars so they “float” at the ends of flexible attachments, accommodating changes in temperature and wind.

The statue includes a several symbols of freedom. “Liberty” is actually stepping out of shackles that lie at her feet, signifying escape from tyranny.  The tablet in her left arm is inscribed with Roman numerals of the date of the Declaration of Independence: July 4, 1776. Her crown’s seven rays suggest the seven seas and seven continents.

Finally, her torch and its flame symbolize truth and justice enlightening the world. 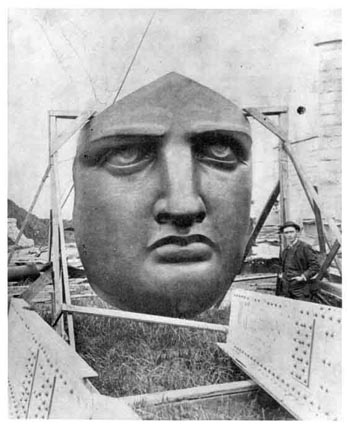 The concrete and granite pedestal (designed by Richard Morris Hunt) sits atop Fort Wood (1808-11), a star-shaped fortress built to protect the harbor. It later served as a Civil War recruitment camp.

The statue was constructed in Paris (1881-84), then dismantled and shipped to the U.S. in 214 crates.The crates sat unopened for more than a year because the American committee could not raise money to build the pedestal.

It wasn’t until Joseph Pulitzer promised to print every donor’s name in his newspaper that donations poured in. On October 28, 1886 President Grover Cleveland dedicated the statue.

Bartholdi believed the statue “ought to produce an emotion in the breast of the spectator, not because of its volume, but because its size is in keeping with the idea it interprets.” To millions of immigrants, passing the statue as they entered the U.S., it did just that: welcoming them with a promise of freedom and opportunity.

“I lift my lamp beside the golden door!”
The New Colossus, Emma Lazarus 1883

Visiting the Statue of Liberty

On your own, the only way to reach the Statue is by a ferry that leaves from Battery Park on the tip of Manhattan. (Subway: 1 to South Ferry, 4 or 5 to Bowling Green, R or W to Whitehall Street). Ferries depart Liberty State Park in Jersey City, New Jersey as well.

The ferry to the Statue of Liberty leaves every 30 minutes from 9:30am to 3:30pm (subject to change, and with expanded hours in summer). The ferry stops at Liberty Island and Ellis Island before returning to Manhattan. Passengers can get off at each destination, or remain onboard to continue to the next. Ferry schedules are posted at each destination. (Tip: The left side of the ferry has the best views when approaching the islands.) 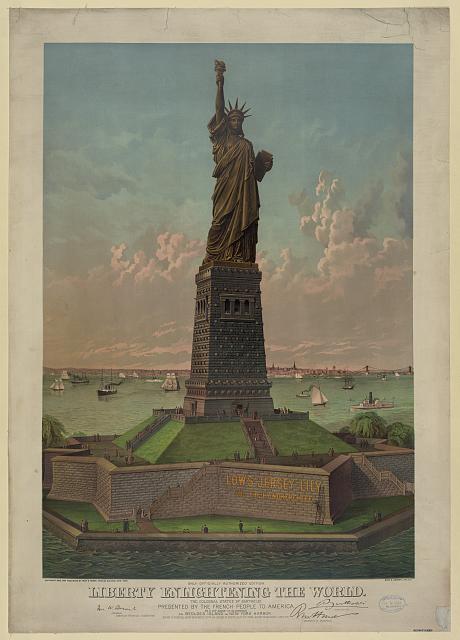 Admission to the Statue and the Park requires purchasing a ticket for the ferry. Tickets can be purchased at Castle Clinton (the circular fort at the foot of Battery Park) or online. Adults: $18, seniors:$14, children under 12: $9.

Before boarding the ferry to the statue of Liberty, everyone must pass through airport-style security. Luggage, large bags, and anything deemed a weapon are prohibited. No pets are allowed, only certified service dogs. Snacks, beverages, and souvenirs are available onboard.

Liberty Island is well-run by the National Park Service.

After proceeding through the park’s main gate, an information center is to the left. The restrooms, café, and gift shop are to the right.

Directly ahead is a circular area with incredible views of the Manhattan skyline and Ellis Island. Continue along the island’s shoreline for great harbor views and, of course, a close up look at Lady Liberty.  The outdoor exhibit panels are very informative.

Visit the park’s website for information, videos, a virtual tour, and a real-time “Torchcam.”