Spectacular sights and fascinating history on the Statue of Liberty tour 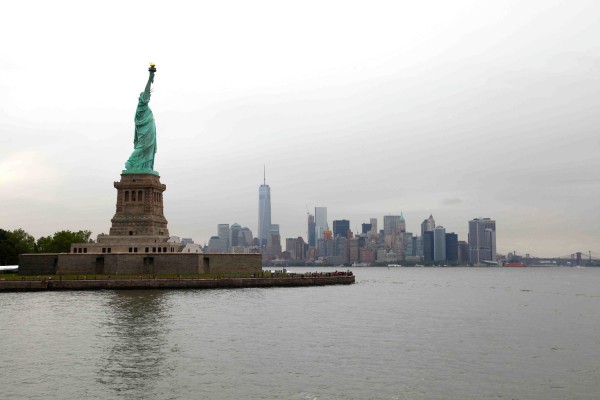 From the moment I met my wonderful tour guide Michael, I knew that I was in for an interesting day. Michael was every inch the typical New Yorker (complete with a fantastic accent) and could trace his own family history all the way back to the 1840s! This meant that both the Statue of Liberty and the history of Ellis Island had a particular personal significance for him, which came through very strongly in his passionate and well-informed delivery.

Before our small tour group boarded the Statue of Liberty ferry that would bring us to Liberty Island, Michael took the time to point out some interesting sights around the area, including Castle Clinton, once the home of American immigration before Ellis Island, and a harrowing bronze memorial to the merchant mariners’ who lost their lives during World War II.

After this brief introduction to the Battery Park area, our group boarded the ferry to Liberty Island. Micheal immediately ushered us to the best seats onboard and, as the boat began to pull out from the harbour, we were met with spectacular views of both the New York City skyline and the Statue of Liberty. It was clear from the outset that Michael really knew his stuff!

Following our quick yet pleasant trip on the Statue of Liberty ferry, we arrived on Liberty Island where Michael gave us some fascinating facts about how the statue was built. He also highlighted some important attributes about the statue that I had never noticed before, such as the fact she was built to look as if she was walking against the breeze.

For the final part of our tour, we took the ferry to Ellis Island. When we arrived, Michael guided us around the Great Hall, the vast room where immigration took place, and told us some inspiring stories about those who had passed through on their search for a better life.

Michael’s in-depth knowledge and genuine interest in the historical significance of the island really helped me to fully appreciate just how lucky I am to be able to visit the U.S with such ease.

As a history lover, I could not recommend the Statue of Liberty tour enough. Not only did I learn some amazing facts and get to experience one of the world’s most iconic landmarks up-close, I also got to do all of this in a relaxed, stress-free environment – what more could you want from a tour?

Want to learn more about Lady Liberty and the millions of immigrants that passed through Ellis Island? Just book your place on the Walks of New York Statue of Liberty tour today.