Crossroads of the World: The Walks Guide to Times Square Attractions

Times Square epitomizes New York City – big, chaotic, crowded, flashy, and awe-inspiring.  Known as “the Crossroads of the World,” this canyon-like space is created by the intersection of Broadway (curving westward) and Seventh Avenue.  Seen in photos, films and TV (especially every New Year’s Eve), it is one of the great gathering places of the world and Times Square attractions are some of the world’s most popular. 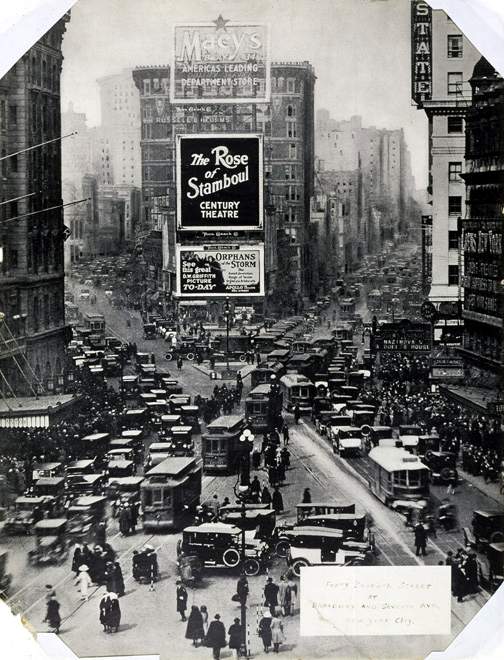 During the 19th Century the area was called Longacre Square, and was primarily home to carriage-making, stables, and brothels.  It became Times Square in 1904, when the New York Times opened their distinctive headquarters with the new subway system hub beneath.  In the early 20th Century, the area was a glamorous entertainment district, and Times Square Attractions included Broadway theaters, nightclubs, movie palaces, restaurants, and hotels.  But after the 1950s, the square began a downward spiral. Burlesque gave way to pornography, which was followed by drug dealing and crime. By the 1970s, Times Square was a seedy, dangerous place (as seen in films like Midnight Cowboy and Taxi Driver, which were filmed there).  In the 1990s the city (lead by former mayor Rudy Guliani) drove out the porno theaters and drug dealers and enticed businesses to move into the area. Times Square has been dramatically transformed into a tourist-friendly entertainment and shopping district.

A tour of Times Square –

Beginning at 42nd Street and Broadway facing north into the Square, look to your left (west).  This block with the flashy marquees is the “naughty, gaudy, bawdy 42nd St” celebrated in song and films.  It is a microcosm of the square.  Once packed with Broadway theaters, it was the glamorous center of nightlife and Times Square attractions.  During the Great Depression, theaters gave way to arcades, sideshows, flea circuses and burlesque, while the surviving theaters began showing second-run films and eventually…porn.  The sidewalks were filled with drug dealers, thieves and prostitutes. (In 1984, 2,300 crimes were reported on this block alone.)  The turnaround began in the 90s, when the city took over the block, evicted most businesses, and Disney restored the New Amsterdam Theater (for an inside look at the theater and some of its most memorable productions don’t miss our Disney on Broadway Tour). Now the block includes three Broadway theaters, an off-Broadway theater, rehearsal studios, two multi-plex movie theaters, restaurants, a hotel and, like a return to its sideshow era, Ripley’s Believe It or Not and Madame Tussaud’s.

Walk north on Broadway into the Square.  At 43rd and Broadway you’ll see the compact Police Station to your left (the area is quite safe, canvassed by cops, many undercover, and video cameras). On the eastern corner is the Nasdaq MarketSite, epicenter of Nasdaq news and events.  Through the glass you can see their broadcast studio, where over 100 live market updates are taped for networks like CNBC, Bloomberg TV, and Reuters. 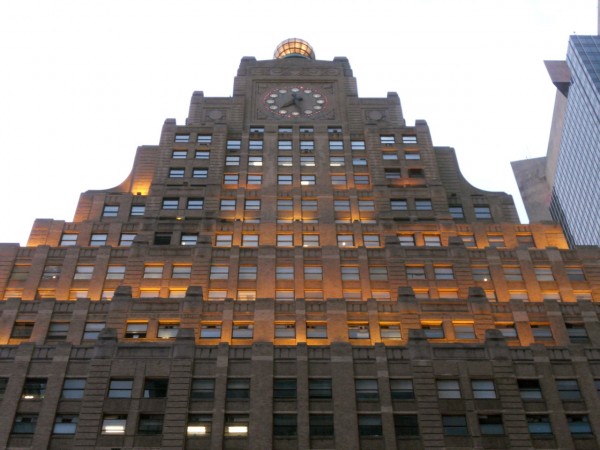 Across 7th Avenue you’ll see the distinctive marquee on the Art Deco Paramount Building, which is topped by a four-sided clock and globe (both were painted black during WWII to maintain blackout conditions).  The marquee now belongs to the Hard Rock Cafe, but once fronted the historic Paramount Theater, a premiere movie palace that also hosted performances by Benny Goodman, Glenn Miller, Tommy Dorsey, and Frank Sinatra.

Continue one block north to the small island at Broadway & 44th St. Turn around to look back at the towering Times Building. This is the landmark, wedge-shaped building that was formerly the headquarters of the New York Times (and gave the square its name). It’s covered in LED video screens, along with the famous Zipper that wraps around the facade.  The Zipper still provides up-to-the-minute news. (This is where New Yorkers learned of election results, the end of both World Wars, the asassination of JFK, and the attacks on 9/11).  On top of the building you’ll see the famous flagpole and, one of the most recognizable Times Square Attractions, the crystal ball that annually drops to ring in the New Year.  New Years Eve celebrations have taken place here since 1904.

Across Broadway, you’ll see the scrolling electronic marquees on Times Square Studios, from which Good Morning America and ABC News programs are broadcast.  On the north corner is the large Toys R Us store which includes a 60-foot, indoor Ferris wheel, a life-sized T-Rex dinosaur model, and a 4,000 square-foot Barbie dollhouse.  Across 7th Avenue is the Minskoff Building, which houses a Broadway Theater on its third floor (current home to The Lion King) and MTV Studios behind its second floor windows. 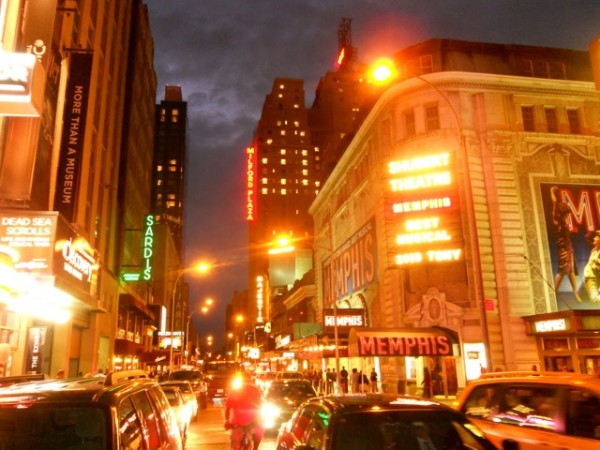 Looking west down 44th St you’ll see some of Broadway’s most historic theaters, where shows like Oklahoma, South Pacific, The Music Man, Camelot, and The Phantom of the Opera (still playing as the longest-running Broadway show in history) have premiered.

Continue north to 45th & Broadway.  You’ll pass the concrete behemoth Marriott Marquis, the first new hotel built in Times Square in decades.  It includes a huge atrium, a Broadway theater, and a revolving restaurant and bar on the 45th floor.  There was much controversy over its construction because five historic Broadway theaters were demolished. (Actors, including Christopher Reeve and Tony Randall, fought to save them.  Some even chained themselves to the old theaters to stop the wrecking ball.)  The block of 45th Street to your left (west) is lined with six Broadway Theaters (the highest concentration of theaters in the city).  44th & 45th Streets are the heart of the Broadway district.

At 46th Street you’ll see the flashy American Eagle Outfitters store, which is covered in LED screens featuring videos.  Illuminated signs, known as “Spectaculars,” have been a part of Times Square since it was called “The Great White Way” for its dazzling lights.  In fact, there are zoning regulations that require buildings in the square to cover a specific percentage of their facade with illuminated signs. 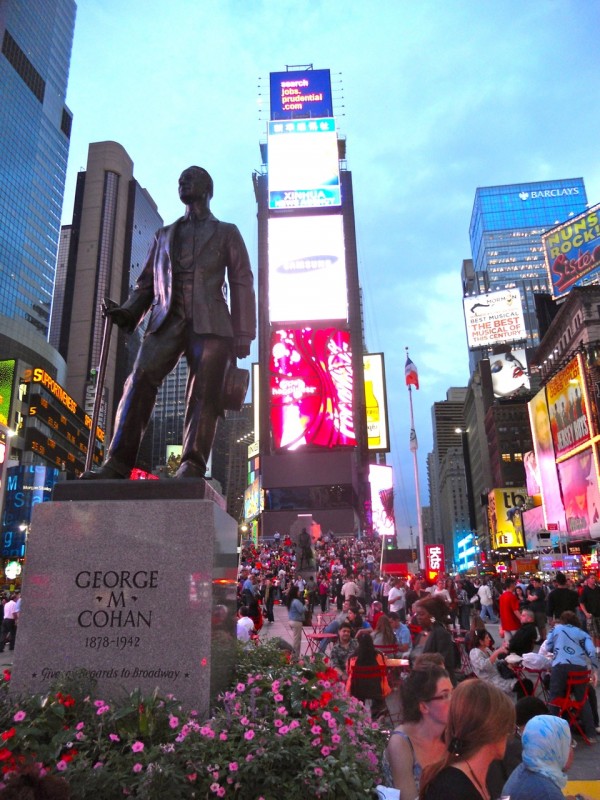 Cross 46th Street to enter Duffy Square, named for Father Duffy, a WWI hero whose statue is found in the middle of the island. Before you is the statue of George M. Cohan, the performer, writer, and impresario who wrote “Yankee Doodle Dandy,” and “Give My Regards to Broadway.”  Cohan’s energy, optimism, and chutzpah set the tone for the emerging Broadway musical.

Across Broadway is the Times Square Visitors Center.  Located in a historic movie theater, the Center offers restrooms, ticket sales to Broadway shows (full price, but one stop shopping), tours and tourist information, and entertaining exhibits about Times Square, including a replica of the New Years Crystal Ball.  Next door to the Center is the historic Palace Theater, once the pinnacle of the Vaudeville world.  Only the theater’s marquee and entrance are visible since it has been encased by the Doubletree Suites Hotel, which was built on top.  The interior of the theater was landmarked but not the exterior, so the hotel bought the air rights (the right to develop above a building) and swallowed it.  The theater’s brick wall and fire escapes are still visible along 47th St.

At the north end of the square is the TKTS booth, which sells discount, same-day tickets to Broadway and off-Broadway shows.  Tickets are usually 50% off full price, so lines can be long.  Illuminated signs near the ticket windows display which shows are offered and their discount.  Above the booth are the new red glass steps which offer a great place to relax with people from all over the world.  From there the spectacular panorama of Times Square is like none other.

The Times Square Alliance has a wonderful website, full of information about its history, attractions and events.

If you want to see broadway and the New Amsterdam Theater with one of our expert local guides check out our Disney on Broadway tour for a whole new perspective on one of the most legendary stretches of city in the world. 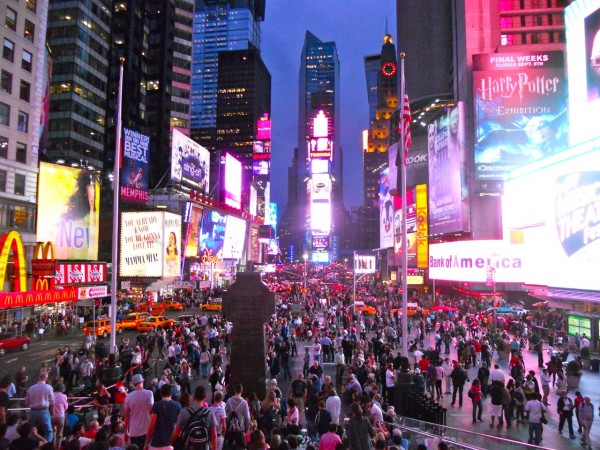