What To Do in Central Park: A Walking Tour 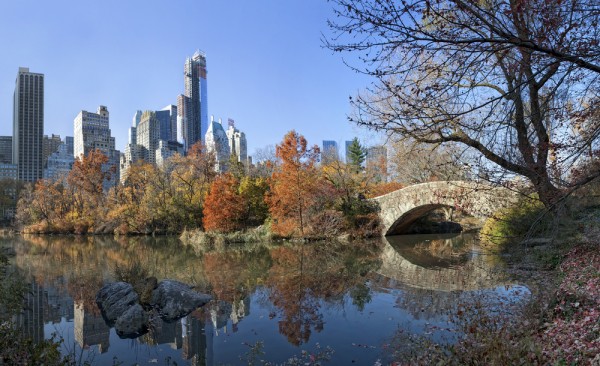 Central Park, beautiful in every season, boasts a lot of things to do, too!

If you’re interested in experiencing New York like a local, check out some of our other blogs or book one of out tours, run by passionate local experts all around the city.

A quick history of Central Park 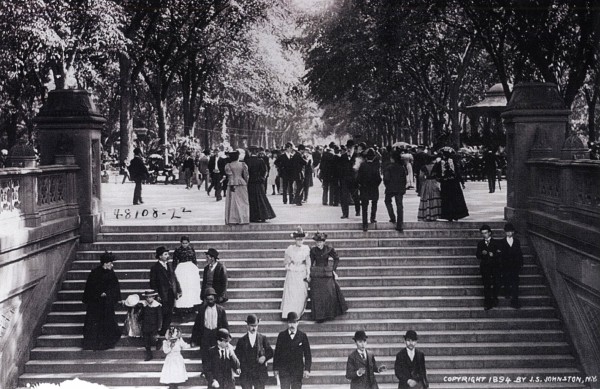 New York City grew at an astounding rate in the 19th century. As its population swelled, it became very congested.

With few green spaces, progressive city elders saw the need to create a “People’s Park” in the expanding urban jungle. So, in 1856, the city purchased a large, desolate plot and held a competition for a park design.

The winning team—landscape architects Frederick Law Olmstead and Calvert Vaux—started work n in 1858. Over the next 20 years, the swampy, rocky terrain was transformed into a bucolic haven, full of scenic environments that were as carefully-designed as stage settings. The park quickly became a popular retreat for New Yorkers—particularly after the subway made it easily reachable.

The park suffered from neglect and deteriorated during the 1960s and 70s, when it was teeming with vagrants, drugs, and crime. But in 1980, the Central Park Conservancy was formed to restore and maintain the park. And it’s done an incredible job of returning the park to its original glory!

How to get to Central Park 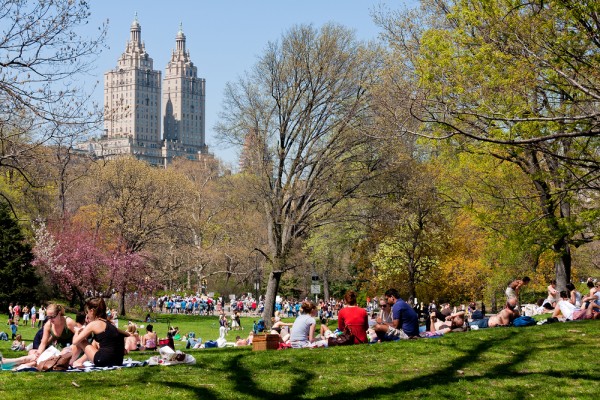 Central Park is open from dawn to 1am (stay on well-lit park roads at night). 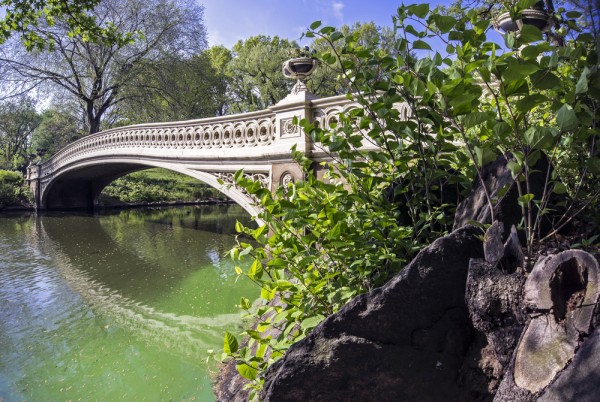 Prefer to take the bus? The M1, M2, M3 and M4 run north up Madison Ave. (one block east), and south down Fifth Avenue.

The park’s paths and roads curve by design, making it easy to get lost (in the park, not such a bad thing!). Free maps are available at the park’s five official Visitors Centers. Check the park’s website for downloadable maps, schedule of free park tours, and special events.

The Conservancy’s great mobile app (only IOS) includes interactive maps, and detailed info about the park’s sites. Finally, throughout the park you’ll find green signs posted with instructions to call for recorded narration about your location via mobile phone.

What to do in Central Park

Want to know what to do and see in Central Park? We’ve got you covered!

Just remember that the park is full of wonderful sights—far too many to see in a single visit. Here’s our brief tour of the Central Park highlights! 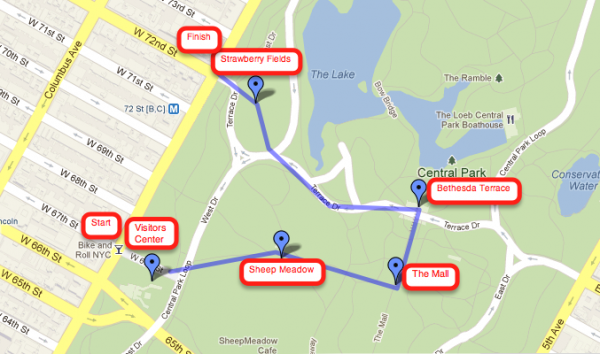 1. Enter the park at Central Park West and 67th St., where you’ll find the old sheep hold, formally the famed restaurant Tavern on the Green. The building is currently operating as a Visitor’s Center, shop, and food court. Here you can pick up park maps and information.

2. Cross West Drive (be sure to look both ways for runners, cyclists, and skaters!). This is where the finish line of the annual NYC Marathon is located. Follow the path along the north rim of the Sheep Meadow. This grand open green (where sheep actually grazed until the 1930s!) is a favorite gathering place for sunbathing, picnicking, and games of Frisbee.

And the expansive field, with the backdrop of the midtown skyline, is an awesome sight. Bonus: On the path, you’ll find a nice cafe with restrooms. 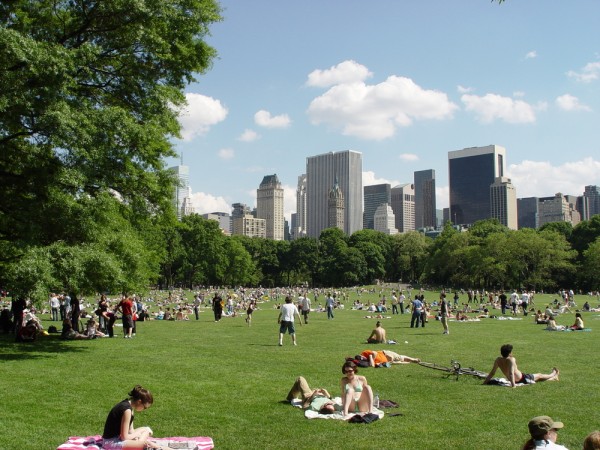 3. Continuing east as directly as the path allows, you’ll arrive at the Mall. This formal promenade, lined with tall oak trees, is justifiably famous! At the Mall’s southern end is the Literary Walk, with statues of Sir Walter Scott, Robert Burns, and Shakespeare.

4. Head north along the promenade, past the band shell, to arrive at the Bethesda Terrace.  There is a lot to see here, including the beautifully tiled Arcade, the grand staircases, and the Bethesda Fountain (aka “Angel of the Waters”). Note the intricate sculptures throughout the sandstone terrace by Jacob Wrey Mould.  Continuing to the lake, you’ll see the Loeb Boathouse (restaurant and spot to rent rowboats) to the east, and the Ramble directly across the water. 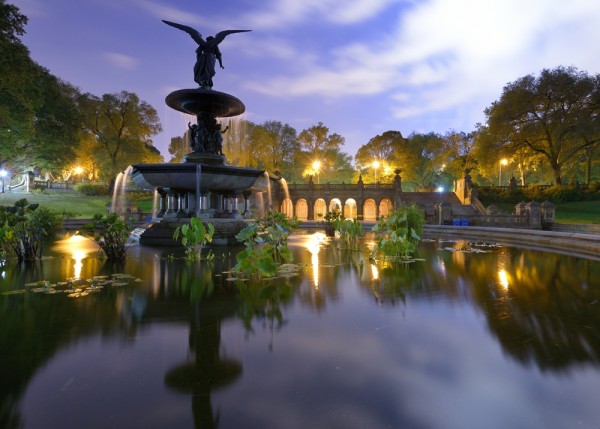 5. Returning to the top of the terrace, head west along Terrace Drive. When you arrive at the intersection with West Drive (you’ll see the statue of Daniel Webster), take the narrow path uphill (slightly to the right) until you reach Strawberry Fields. This space is dedicated to the memory of John Lennon. Its centerpiece is the lovely “Imagine” mosaic—often decorated with flowers and candles by devoted fans. (Lennon lived in, and was killed at, the historic Dakota Apartments, which are just across Central Park West).

Continue west on this path to the park’s entrance at 72nd Street.

Don’t want to leave yet? Here are some other options! 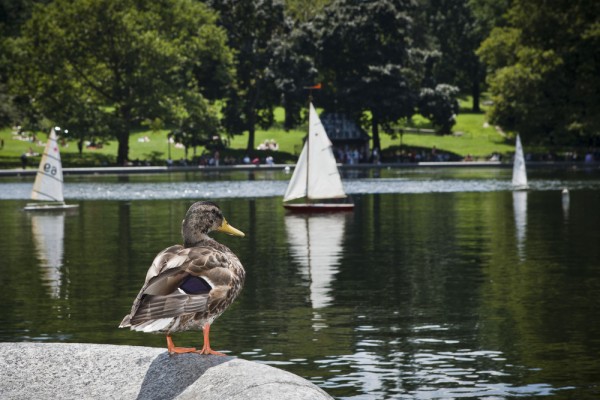 The Boat Pond in Central Park

East: Heading to Fifth Avenue, veer north a bit to the Conservatory Water (the Boat Pond), a nice pond where toy sailboats glide.

North: From Bethesda Terrace, continue west along the edge of the lake to the famous Bow Bridge, which offers wonderful views of the lake.

Continuing north across the bridge will take you into the Ramble, a densely forested woodland with a creek, pond, a rustic shelter and bridges. (This is a favorite spot for birdwatchers.)

Just north of the Ramble is the Great Lawn and Belvedere Castle. Heading east you’ll find the Metropolitan Museum of Art. Continuing north will bring you to the Reservoir, the rustic woods around the Loch, the Conservancy Gardens (5th Ave & 103rd St), and eventually to Harlem Meer.

South – leaving the south end of the Mall, to the west you’ll find the Carousel, the Heckscher ball fields, and large outcroppings of Manhattan schist (bedrock). To the east you’ll find Wollman’s Rink, the Zoo, and the pond, which is spanned by the familiar Gapstow Bridge.

In summer, the Delacourte Theater (south of the Great Lawn) presents Shakespeare in the Park.  Tickets are free, and the top-notch productions feature Broadway and film stars.

Also in Summer, the Metropolitan Opera and New York Philharmonic offer free concerts on the Great Lawn. The lawn was the location for famous televised concerts by Pavarotti, Simon and Garfunkel, Barbra Streisand, Diana Ross, and Andrea Bocelli.

Summertime is also when the annual Summerstage festival takes place. 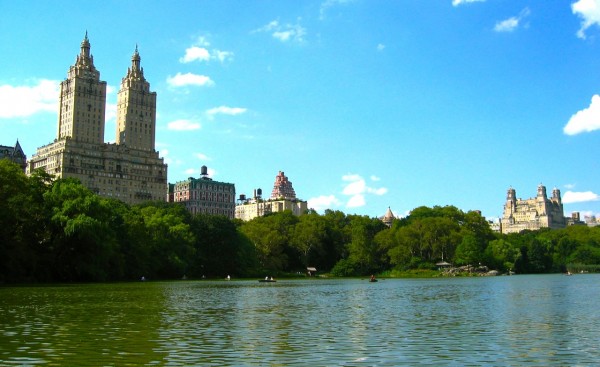 Cherry Blossoms: Brooklyn Botanic Gardens
Lincoln Center: What to Know Before You Go